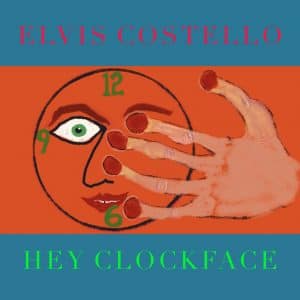 After a career spanning more than 40 years, it’s safe to assume Elvis Costello has reached the stage where he can just do anything he wants. His 31st studio album, Hey Clockface, is a dizzying, sometimes bewildering, dash through a whole load of genres and, even though he’s reached his mid-60s, that famous fire in his belly is yet to be extinguished.

Maybe the restless feel to Hey Clockface is down to circumstances – the recording of the album began earlier in the year after he was forced to abandon his tour due to the worldwide pandemic. Then the sessions were worked on in lockdown conditions in Vancouver, polishing up earlier recordings started in New York, Helsinki and Paris.

This doesn’t sound disjointed, but the dash from spoken word to spiky post-punk, right through to lovelorn jazzy ballads may seem a bit disorientating at first listen. Yet after a few listens, it all begins to make a twisted kind of sense.

Opening track Revolution #49 still seems like a particular curveball to throw though – two minutes of solemn Arabic-sounding instrumentation while Costello solemnly intones that “love is the one thing we can save”. From there, we’re straight into the spiky rock of No Flag, the sort of sardonic New Wave which made Costello’s name in the late ’70s.

If there is a consistent sound to the record, it’s the piano ballads like Byline or They’re Not Laughing At Me Now. The muted brass of The Whirlwind sounds particularly effective when accompanied by Costello’s sorrowful vocals, and The Last Confession of Vivian Whip (co-written by Costello mainstay Steve Nieve) is another fine example of the way Costello can write portraits of desperately sad people: “But when I took you in my arms, I wondered why it took so long for me to recognize this precious song, had it been playing all along?”

As if to prove the album’s diversity, those two tracks sandwich Hetty O’Hara Confidential, a gloriously spiky story of a gossip columnist with half-rapped lyrics like “trading favours for footnote plugs, who’s got the needle, who’s fit to burst”. It sounds a bit jarring at first in the context of the ballads which surround it, but soon reveals itself as one of the best tracks on the record.

There are nods to Tom Waits sometimes, both in his 70s barfly phase, and in another spoken word track Radio Is Everything which recalls the surreal ramblings of Bone Machine. Yet if there an issue weighing down Hey Clockface, it’s Costello’s own history. There’s nothing to match anything from the many classics of Costello’s past, and sometimes, as in the overtly jaunty, borderline irritating title track, it falls well short.

However, as uneven as Hey Clockface can become, there are still enough reminders of Costello’s genius scattered across the album. After all these years, his aim is still mostly true.