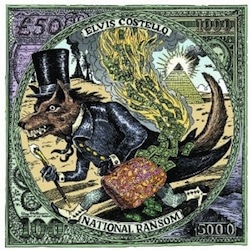 Elvis Costello may be the iconic songwriter who most divides opinion. For every person suspicious of his persistent genre-hopping and supposedly mannered voice, there is someone else for whom these are his considerable virtues. Costello himself seems entirely comfortable with his chameleonic status.

Critics often want to see each alleged ‘return to form’ as a recognition that he has never made a better record than This Year’s Model and that he should be doomed forever to repeat that album’s brilliantly vicious snarl. Anger is his true voice and any sign of maturity should be condemned as a moderate softening of his style. Yet Costello is precisely the kind of artist for whom the term ‘form’ seems entirely inappropriate. It’s never quite clear which Costello will appear next. Will it be the cocktail balladeer of North or the misanthropic wordsmith of Brutal Youth?

National Ransom is more confounding than most of Costello’s recent adventures. It features members of Costello’s newest ensemble, The Sugarcanes, and is again produced by T Bone Burnett, but it is far from the one-dimensional old time country of the Secret, Profane And Sugarcane album. It continues Costello’s fascination with songwriting tradition, but also captures him at his least focused and most willfully wayward. It is most reminiscent of Spike – The Beloved Entertainer, where he veered maniacally between classic pop, New Orleans inspired brass arrangements and cabaret. The results are sometimes fascinating, but there’s little doubt that the stories and explanations for the songs provided in the liner notes help with what would otherwise be challenging navigation. National Ransom is one of Costello’s longest and densest albums – a contradictory gambit given his recent rash commitment to withdraw from making albums altogether.

There’s relatively little of the caustic Costello here. The title track may join Richard Thompson’s The Money Shuffle in a burgeoning clutch of songs responding to the financial crisis, but it’s clear that it also adopts a historical perspective, as indeed does much of the rest of the album. Musically, despite the presence of radical guitarist Marc Ribot (who interestingly also guested on Spike), it seems like a pub rock version of the E Street Band. More conventional still is I Lost You, a sprightly but over-polished co-write with Jim Lauderdale that sounds like commercial Nashville product.

Elsewhere, Costello revels in Americana, examining the broad intersection between blues, swing and traditional country music, right back as far as the 1920s on songs such as A Sweet Drag With Josephine. Costello is not a mere tourist in these idioms; he has clearly immersed himself in the tradition. His phrasing remains peerless, and he has toned down the heavy vibrato for many of these songs in order to adopt a more conversational style. Perhaps the most successful example is the widescreen narrative of Jimmie Standing In The Rain, relating the story of a cowboy singer playing the music halls of England in 1937. It has something of the deep sadness of Sylvain Chomet’s recent Jacques Tati-inspired animation The Illusionist.

National Ransom benefits from repeated listens. Songs that initially seem merely pleasant, such as Dr Watson, I Presume or the mournful ballad All These Strangers, eventually reveal themselves as complex, intricate and rewarding pieces. Costello’s genius cuts through on gems such as The Stations Of The Cross. Yet despite the kleptomaniac assumption of various musical masks, National Ransom is too often Costello at his most earnest – admirable but not always enjoyable, and sometimes needing a more playful touch.

Thematically, this seems like one of Costello’s least personal albums, as he relates various historical tales, sometimes in third person narrative, sometimes in character. The silky ballad You Hung The Moon is apparently about a s�ance held in 1919 by a family grieving for a soldier executed for desertion in the First World War. On Bullets For The New-Born King, he adopts the voice of a guilty assassin. Perhaps National Ransom is less a randomly selected almanac, and more a series of vignettes that could potentially have relevance to any particular time and space. Costello is, inventively, trying to make musical antiquarianism a radical pursuit.