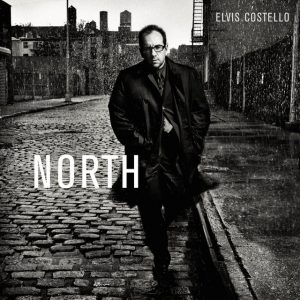 Elvis Costello‘s debut album was called My Aim Is True but throughout his career I’ve always thought he was a bit hit and miss. I mean, Oliver’s Army on Armed Forces was all right and an obvious hit; my favourite Watching The Detectives (on the aforementioned debut) was tops; and So Like Candy was fun; but he has always been a bit of a freewheeler flitting from genre to genre in an apparent loss for inspiration (or is it a fear of being too predictable?).

His latest attempt at turning heads and tables, quite frankly, made me feel a bit nauseous. From the opening gentle strings to the final lilting melody, I could hardly keep the tracks going or my dinner down. It was like an undulating ocean rocking my boat gently from side to side till I got sea sick.

Has he been watching the scene in Moulin Rouge over and over and over again, where Nicole Kidman and Ewan McGregor are singing their “secret song” to each other, fawning over the melancholy that is their doomed love? Or perhaps he’s been hanging around “l’entré des artistes” outside the Sadler’s Wells’ theatre accosting people coming out and asking them for their favourite ’50s crooner. My flatmate said it reminded him of Wings-era Paul McCartney…

So its basically a mix of jazz skiffle and drums with slightly classical piano breaks draped with trembling violins and static oboes. Schmaltz. Pure schmaltz. I even like some Dean Martin and I loved High Society but this is far too much for my poor stomach.

In You Turned To Me he sings, no wait, opines, “How I was lost… All I did was dream.” He’s positively dripping with the stuff. Is this man in love or has he been dipped in honey and Frank Sinatra tabs? He’s like one of those lounge singers in Vegas you imagine killing themselves by stuffing hair gel and sequins down their own throats.

In Fallen, which is one of the funniest things I’ve heard all year, there is an actual violin flourish over the bridge. I kid you not, I laughed out loud and didn’t stop till the end of the song.

So I’m not quite sure what to make of this one. It’s sort of like songs for people called Colin or Herbert, for men who long for the love of a woman but are actually gay.