Elvis Costello And The Roots – Wise Up Ghost And Other Songs 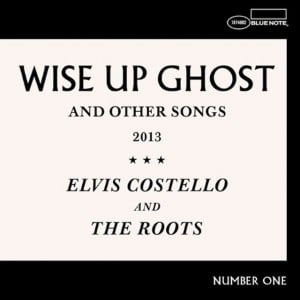 In a 2002 interview, Elvis Costello bemoaned the relatively cool reception of his many collaborative albums: “They’re not side projects… I give them all my time and attention. The attitude since [1996 album] All This Useless Beauty has been, Why doesn’t he knock it off and make an Elvis Costello record?”

Costello has steadfastly refused to “knock it off” in the 11 years that have followed those comments. During that time, he’s written and recorded with artists as diverse as jazz pianist Marian McPartland, R&B legend Allen Toussaint and the London Symphony Orchestra. Wise Up Ghost And Other Songs is his latest collaborative work and perhaps the most intriguing yet: a 12-track album produced with American hip-hop veterans The Roots, recorded over a year in a series of experimental sessions after Costello met the band as a guest on Late Night With Jimmy Fallon – the television show for which they act as the house musicians.

Wise Up Ghost… is attracting significantly more attention than any of Costello’s previous collaborative works. It’s easy to understand why that’s the case: at first glance, the union between a 59-year-old former punk rocker from Liverpool with a cooler-than-thou hip-hop act from Philadelphia is an incongruous one. And yet there’s always been an R&B undercurrent to Costello’s music. Despite his reputation as a master wordsmith, his songs have always displayed plenty of rhythmical nous. Moreover, 1980’s Motown- and Stax-obsessed album Get Lucky!! is a career highlight.

Across Wise Up Ghost…, The Roots should prove themselves to be the perfect foil for Costello’s voice and words. The division of labour throughout the record remains the same: Costello sings, The Roots provide the music, while each song – barring the closing piano ballad If I Could Believe – is credited to Costello and The Roots’ QuestLove. Listeners hoping to hear Costello rapping alongside The Roots’ MC Black Thought will come away disappointed, although that’s probably for the best.

Any album that’s billed as the outcome of jamming sessions always threatens to be aimless and self-indulgent, but that’s not the case here. Sure, Wise Up Ghost… has a loose, off-the-cuff feel that stems from the experimental nature of its genesis but, in contrast, the songwriting maintains the tightly-coiled intensity that’s Costello’s stock-in-trade.

Walk Us Uptown, Sugar Won’t Work and Refuse To Be Saved are the most overtly funky tracks on the album, each one constructed out of QuestLove’s limber drumming, seductive organ licks, swaggering basslines and the occasional burst of saxophone. These tracks conjure up a late-night, cinematic feel reminiscent of Isaac Hayes and Curtis Mayfield’s 1970s output, yet their tasteful minimalism ensures that they also feel utterly modern.

Come The Meantimes, Viceroy’s Row and Cinco Minutos Con Vos (featuring a delectable guest turn by La Marisoul of Mexican-California band La Santa Cecilia) are the tracks which, musically speaking, veer the closest to straight hip-hop. Indeed, take Costello’s vocal off the latter and it could have been lifted straight from The Roots’ 1999 classic Things Fall Apart. In the midst of all this is Tripwire, a sweet ballad that’s among Costello’s most straightforwardly pretty songs.

Throughout the album, Costello quotes lyrics from his back catalogue. Long-time Costello fans will have fun spotting the references to some of his back catalogue’s deepest cuts: Refuse To Be Saved quotes from Mighty Like A Rose’s Invasion Hit Parade; Wake Me Up (“…with a slap or a kiss”) is a call-back to 2006’s The River In Reverse; (She Might Be A) Grenade is a re-imagining of Pulling Out The Pin from 2004’s The Delivery Man.

But this isn’t an exercise in re-heating old work. Instead, Wise Up Ghost… finds Costello re-contextualising his back catalogue in a manner that invites comparisons to hip-hop’s penchant for sampling. For example, Stick Our Your Tongue mashes together lyrics from 1983’s Pills And Soap and Hurry Down Doomsday, another Mighty Like A Rose number. It’s likely that Costello spotted a thematic link between the two songs that was ripe for exploration: Pills And Soap is a veiled swipe at the British media’s response to the Falklands War, while Hurry Down Doomsday appears to be a commentary on cultural imperialism. Coupled with The Roots’ sinister backing, this hybrid of a song seethes with anger.

Wise Up Ghost And Other Songs is undoubtedly a smart and richly-detailed album, but it’s not offputtingly cerebral. This is an album that’s aimed equally at the head and the feet. Not only is it one of Costello’s best collaborative efforts, it’s also one of his best albums full stop. Recommended for Costello newcomers and long-time believers alike.