EMA – Exile In The Outer Ring 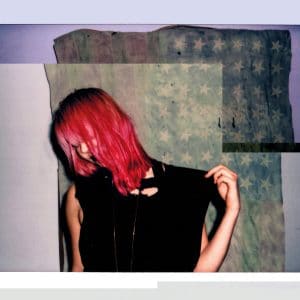 EMA, aka Erika Anderson, has pretty much always failed to meet expectations. She’s far more interesting than that. From her work with noise-folk trio Gowns, through to her critically acclaimed solo debut Past Life Martyred Saints, and its follow up The Future’s Void, there’s a distinct sense that she has made music to please herself, rather than record labels, the media or anyone else. The resulting work has been nothing less than thrilling. Hence she now finds herself at a point in her career where there is a specific expectation; that she releases good music. It’s a presumption she fulfils on Exile In The Outer Ring.

The record opens with the metallic shimmer of 7 Years, which is flanked Anderson’s rueful, smoky vocal. It’s a gentle introduction, but a smokescreen for an album of sweeping scope and unflinching purpose. It’s paired with the intimidating electrical buzz of Breathalyzer that builds to an overwhelming crescendo, vibrating potent intoxication. It’s a tale of drug use, but Anderson hasn’t cast herself as judge and jury – her ambivalence leaves room for the idea that a woman can get into a car and get fucked up without being either a victim or a bad person.

Exile In The Outer Ring explores complex subjects without reducing them to empty soundbites and neat conclusions. Anderson has said that this record is her address to Middle America, which currently finds itself at the sharp end of the anti-Trump administration discourse having been charged with putting him in office. Although Anderson is clearly in the anti-Trump camp she also hails from the Midwest, and is not willing to dismiss that population out of hand.

I Wanna Destroy speaks of how people on “the outer ring” are seen as “arbitrary,” and Aryan Nation balks at the rabbit hole existence of living in that outer ring, exiled from the metropolitan party: “getting high it’s a family tradition/adding one more kid to a cycle that’s vicious.” But she also warns against a reaction from that population that plays into the hands of governments and systems who have little truck with their best interests: “We could steal but we’re stealing from them.”

Production-wise the album is a joy, and a much-needed break from a plethora of sanitised, overworked records that all end up sounding the same. There’s a dissonance, and earthiness to the recording that makes it harsh in places, but also distinctly human. Given the tense subject matter and the often violent music, it could easily feel like a grind, but Anderson grafted these elements together with moments of beauty and playfulness to fine effect.

The melodic Always Bleeds has a gorgeous circular guitar riff ranked up to the max by the song’s conclusion. And Down and Out has an outwardly poppy feel; the beat’s uptempo, it has catchy hooks and a singalong chorus. Musically it works in every way against the sentiment of futility. Equally, 33 Nihilistic and Female dishes out a glorious middle finger to the suggestion that women should adhere to a prescribed notion of how they should be, particularly when they’ve breached 30-year mark, in the most celebratory and playful way: obvious choices are always traded for a more interesting and compelling slant.

Blood and Chalk is yet another highlight. It features one of the album’s prettiest melodies and Anderson’s most tender performance. Her characters aren’t always strong and infallible, but amid that vulnerability, there is resilience: “And I know the rage that’s in me/but I’m just what you made me/ I’ll cut away ’til I’m just blood chalk.” This clash between recoil and nihilism is what makes the record so electrifying.

Catharsis is a notion often bandied around when asking about pop music, but in reality, it’s often nothing more than a mawkish fraud. Exile In The Outer Ring doesn’t achieve this either, but then it doesn’t claim to. What it does is lay a whole load of shit out on the table, and in return achieves a huge sense of relief – and the beginning of an honest conversation.