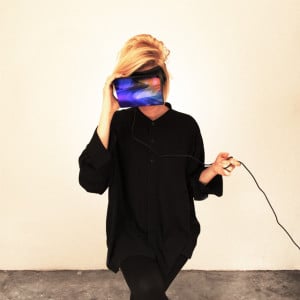 Erika M Anderson’s debut album Past Life Martyred Saints was a difficult listen. A rewarding, phenomenal album, most certainly, but at times the personal nature of its content made for a tough ride. It was an album that worked as a whole; yet take the songs out of that context and they didn’t seem to function quite as well.

It is perhaps not entirely surprising then, that part of EMA‘s reasoning for The Future’s Void was to “keep the songs from being advertisements”. Whether that works out remains to be seen, as there are some quite beautiful and pop-infused moments to be found sprinkled across the album despite the best efforts of EMA and her co-producer Leif Shackleford to keep away from the ears of the commercial fraternity.

Whilst the outlook this time around is still rather personal, EMA has widened the scope a little more and focused on the nature of social media and privacy. It’s one thing to explore personal issues on an album, but with the all encompassing information store that is Facebook (amongst other such applications) it seems that nothing is personal or private anymore. This is not a tin-foil helmet of an album, but there is a paranoiac tension that populates these songs. Back in the ’90s it would have been called pre-millennial tension; now with self-sanctioned tracking in place, we’re at a place in history that authors like Orwell, Nourse and Gibson could only have nightmarish visions about.

Perhaps the most telling track on the album is Neuromancer (based, in part, on William Gibson’s novel). It’s a clanking tribal stomp that sees her assessing the narcissism of selfies and a modern age where it’s possible to “know more about the things that you do”. That she conjures up Lucifer and a general feeling of dread as the track progresses is entirely appropriate. As if Lucifer isn’t bad enough, Cthulu also gets a name check on the seething track of the same name. An undulating beast of a track that burns slowly before turning into a gothic floorshaker, it’s an emotive, almost religious plea for redemption.

Away from the mythic, the album opens with Satellites, a portentous industrial number that deals with draconian surveillance techniques and suggests that the real demons are man made. It’s a roaring opener, and proves that Anderson has not only a fine grasp on her musical chops but is more than capable of phenomenal vocal delivery too.

It’s not all industrial doom though, Too Blonde is a hook laden, throat-shredding guitar stomp that harks back to the likes of Veruca Salt or perhaps Hole. 3Jane’s smouldering piano lines are wrapped in cavernous production, which is apposite because this is the song that really captures what The Future’s Void is all about. It is here that she lashes out at the commercial nature of the music industry “I don’t want to put myself out and turn it into a refrain – it’s all just a big advertising campaign” she sings. Lost in the internet void, Anderson muses on lonely superhighways, full of information and communication but presenting only disassociation and a drain on the soul. She nails these aspects as a modern disease, whilst putting in a quite breathtaking performance that thankfully offers a kind of life raft of humanity and compassion.

Dead Celebrity closes the album with tones not unlike those of The Last Post. The opening lines “When you found out it was over tell me what you want to see, when you click on the link of the dead celebrity” sum up the kind of detachment the internet and information overload has instilled in so many. The militaristic backing at least gives some hope that the war is not yet over. With impassioned artists like Anderson around, the poppies are starting to bloom again.