Embrace – Love Is A Basic Need 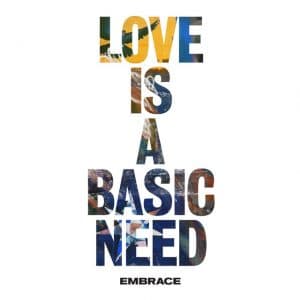 You could sum up studio album seven from Yorkshire’s Embrace in just a handful of words: slow, formulaic love songs with typically gradual crescendo leading to anthemic chorus. But leaving it there would be ruder and more attention grabbing than a 0/5 review.

Yes, Embrace have struggled since their debut The Good Will Out which, since hitting the shelves of Our Price, Woolworths and other longer lasting record stockists in 1998 on its way to Number 1 in the UK, is a contender as one of the better albums of the ’90s.

And the miserabilism kept on coming – no surprise really once you knew of Danny McNamara’s distressing time coping with PTSD. But then something odd happened; in 2014 they chose to release album six with an eponymous tag, weird for a non-debut album, but perhaps necessary in that what lay inside was little like Embrace at all, barring the excellent return to the past in I Run. It was a new dawn, brilliant in places, and so unlike the Embrace of old.

So it seems even weirder that they’ve reverted back to old again, this time hitting us with stereotypically lovelorn lyrics like “I cried a river”, “I can’t give you up” and “I’ll fight tooth and nail”. Opener The Finish Line is decent but not the return to early form that they’ve strived for for so long, an effort destined to adorn the end credits of future TV sports programmes after another Team GB sporting near miss. My Luck Comes In Threes – despite boasting more than its fair share of typical clichés – works the slow ascent to exploding climax a little better. Unfortunately, though, there are the usual tedious yawns that rear their heads again – like dull stop-start single Wake Up Call, and Rabbit Hole.

These do sit amongst more interesting efforts, like single Never, where McNamara surprisingly duets with Kerri Watt to good effect, making that particular sad, love-dominated ode more believable. Other cuts reaching places near the top of the table include the genuinely heart-wrenching, beautifully poignant and minimalist piano number Horseshoe In My Glove, which jerks tears with its touching delicateness, whilst the Valentine’s Day released title track ends the album in epic style, a show-closing song if ever there was one with screeching guitar conclusion. But, appropriately for an album about love, the album’s heart is where its strength is. Where You Sleeping stands out in a similar way to I Run on the previous LP, but in reverse, as its faster tempo contrasts with the other nine tracks for the only song sung by Richard McNamara. All That Remains is the best of all, a classic Embrace cut that’s good enough to sit alongside anything from their debut.

It’s disappointing to see Embrace deciding against more of the same from the last collection; the tentative toe-dipping of the experimental electro excitement has disappeared as quickly as it came. In its place is what you would expect an Embrace album to sound like but, despite being considerably better than many of its peers, Love Is A Basic Need is still not a return to the glory of that consistently outstanding first album.