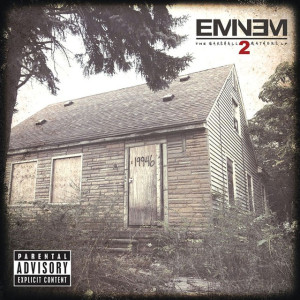 More than 13 years have passed since Eminem released 2000’s seminal The Marshall Mathers LP, a record that is still to this day rightly considered to be one of the greatest rap albums ever made. Dealing with the pressures of fame on the back of the release of his breakthrough album, The Slim Shady LP, the Detroit wordsmith was on the top of his game, dishing out verbal assaults at virtually anyone who crossed his path.

During the time that has elapsed since that rapping tour de force hit the shelves, Eminem’s career has gone from strength to strength, culminating in 2010’s commercially successful Recovery. In fact, it would have been easy for the 41-year-old to capitalise on the mass audience he reached with Recovery by repeating the formula again on his eighth album. But Eminem decided to take a different route entirely.

On the surface, The Marshal Mathers LP2 sounds like an ill-advised idea. Making a sequel is hard enough at the best of times, let alone when the album that is being revisited is hailed as a genre-defining classic. As well as raising expectations to wildly high levels, the move only seemed likely to emphasise that Eminem is no longer in the same place as he was when he burst onto the scene with his angry, chainsaw-wielding Slim Shady persona.

However, any concerns that MMLP2 would be no more than a gimmick are banished within the opening minutes of the phenomenal seven-minute opener, Bad Guy. Revisiting Stan – arguably, the defining moment of MMLP – Eminem imagines the little brother of that song’s crazed fan seeking revenge. “Slim, this is for him and Frank Ocean, oh, hope you can swim good/ now say you hate homos again,” he raps, over an unsettling, squeaky hook.

The song is a lyrical masterpiece, cleverly channeling the criticisms thrown at Eminem over the years through the perspective of Stan’s brother, even addressing his return to the Marshall Mathers era: “And hey, here’s a sequel to my Mathers LP/ just to try to get people to buy.” It’s followed by the equally impressive Rhyme Or Reason, which continues the introspective opening to the record over a reworking of The Zombies’ Time Of The Season.

While the shock value of Eminem’s words has understandably depleted over the years, there’s a sinister assurance to his delivery on MMLP2 that has often been missing since The Eminem Show. “I got 99 problems and the bitch ain’t one/ she’s all 99 of them/ I need a machine gun,” he spits on So Much Better, one of the most brutal demonstrations of his no-holds-barred attitude towards women.

That’s not to say the album is without the more radio-friendly anthems that dominated Recovery, though. Second single Survival revolves entirely around its big guitar riff and rousing chorus, while Rihanna returns for The Monster, which is a perfectly serviceable pop track – even if it’s unlikely to replicate the success of Love The Way You Lie. Yet, Eminem is at his best on MMLP2 when he avoids the more formulaic structures of those tracks.

This is most fully realised in the album’s centerpiece, Rap God, where he confirms exactly why he is regarded as the best MC around by rapping at “supersonic speed” in a dazzling display of his skill. Elsewhere, the addictive, attention-grabbing single Berzerk features a masterful piece of production from Rick Rubin, while the rushing hook and comically self-depreciating chorus on Asshole make it another obvious highlight.

MMLP2 was always going to be a risk for Eminem. The original set the benchmark so high that even attempting to replicate it was going to be a challenge, one that, frankly, he didn’t need to take. However, it is a testament to Eminem’s enduring talent that the album never feels laboured or even slightly dated. Instead, it is a perfect reflection of the world of Marshall Mathers in 2013. All hail the king.