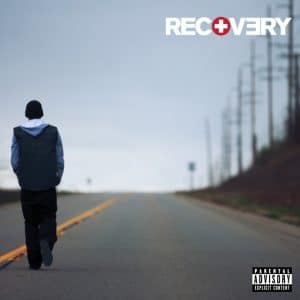 “Critics never got nothing nice to say, man,” moans multi-millionaire rapper Eminem at the start of On Fire, the third track on his seventh studio album, Recovery. Well he’d know, seeing as he himself offers up some fairly cutting views on his more recent output: “Them last two albums didn’t count; Encore I was on drugs, Relapse I was flushing ’em out… So please accept my apology. I finally feel like I’m back.” The opening track, Talkin’ To Myself, sets the tone for an album intent on making amends, one that turns Eminem’s love of searing honesty onto his own back catalogue.

But it starts with Cold Wind Blows, a return to the foul-mouthed, almost comically aggressive tone that peppered The Marshall Mathers LP. Sounding more potent than he has for the past five years or so, Eminem spits words out like a machine gun and, though impressive, it’s also pretty tiresome. Ten years ago it may have been controversial in a Daily Mail kind of way to rap the line “I’ll kick a bitch in the c**t”, but here it’s just offensive, lazy and faintly embarrassing.

It’s a shame that he felt the need to hammer home this return to form simply by swearing and being a misogynist, because much of Recovery does the talking for him. Tracks like the brilliantly brainless W.T.P – which is the best Timbaland beat not to have been produced by Timbaland – and the excellent Rihanna collaboration, Love The Way You Lie, show he’s not lost the ability to craft a future hit single, whilst No Love sees him blow Lil Wayne away with one of his best verses. The fact that the latter is built around a sample of Haddaway’s ’90s dance anthem What Is Love just adds to the song’s odd brilliance.

Still, we’re talking about a rehabilitation here, not a complete return to form, and some of Recovery suffers from too little light amongst the shade. Despite throwing in samples of cheesy dance hits and bringing in pop stars such as Rihanna and Pink (on the pummelling Won’t Back Down), these songs still deal with heavy themes and find Eminem constantly rapping at full tilt. There’s nothing here to match My Name Is or The Real Slim Shady for instant gratification, with first single Not Afraid more lumpen self-help platitudes than joyously self-referential satire.

Recovery is also the first album to feature only one Dr Dre collaboration (the horn-flecked So Bad), Eminem enlisting a myriad of producers in his place. It means that, musically, the album lacks cohesion and at times feels like it relies too heavily on Eminem’s words, which aren’t always up to scratch.

He’s battled through drug addiction and, if Talkin’ 2 Myself is to be believed, a suicide attempt, to make an album that is light years ahead of his last two but that doesn’t quite scale the heights of his purple patch in the early part of the last decade. But if this is just the start of an artistic resurgence then it’ll be interesting to see what comes next. You feel that he’s just getting started again.