Emma Ruth Rundle & Thou – May Our Chambers Be Full 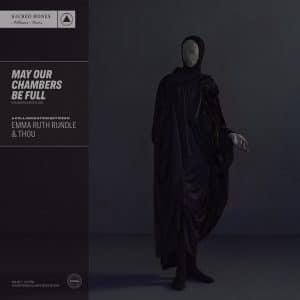 Collaborations between artists can be a strange affairs. More often than not, there’s a power struggle at work, and the result is more akin to a guest spot for one of the artists. When Thou and Emma Ruth Rundle first colluded at Roadburn Festival in 2019, that clearly wasn’t the case. They presented a series of songs that suggested a perfect union. The question was, would they limit themselves to a single performance?

Well, now we have the answer, and what an answer it is. May Our Chambers Be Full suggests that maybe Thou and Rundle would have been better off coming up with a band name, because this album is more than a simple collaboration. Neither artist is swamped by the other on any of these songs; instead, they have each successfully  tapped in to what makes the other tick, and utilised those signifiers, those identifying sounds, to their fullest possible effect.

Rundle has long inhabited a world that has been unfortunately labelled “post-everything” in some quarters. There’s certainly some elements of post-rock in her work, but she’s a far more complex artist than that. Tied up in her music is elements of folk, grunge, doom metal, and good old fashioned pop-nous (listen closely, it’s definitely there). Thou initially seem a more straightforward proposition, but even a cursory listen to their back catalogue shows them to be constantly striving beyond the sludge metal descriptor associated with them. Dig deep and you’ll find post-metal, drone, black metal, punk, and much more besides. Both artists possess in spades the ability to make affecting, heavyweight emotional music. This emotional intensity and willingness to continuously explore the possibilities of sound (heavy or otherwise) is what May Our Chambers Be Full pivots around over the course of these seven incredible songs.

The album is bookended by the two longest tracks, both of which are immense journeys in emotion and sound, albeit in completely different ways. Opening with Killing Floor, May Our Chambers Be Full gets off to a stunning start. Elements of doom metal are at play, and there are hints of the arch-intelligence of Type O Negative, but when the slow, grinding sledgehammer riffs and Bryan Funck’s growl come up against Rundle’s clean, soaring vocals a curious and most wondrous alchemy occurs, a kind of beauty amongst the grime. It’s not just happening at a vocal level, in the thrum of heavy riffing there are gentle, subtle guitar lines weaving themselves in and out as the song progresses. The whole thing is like an intense gothic maelstrom, darkened clouds twisting in a storm that every so often subsides to reveal a black hole sun.

At the other end of the album is The Valley, a quieter, folk inflected close to the album that drifts along like haunted breath on the wind. There’s still a sense of gloom that hangs over the song, but rather than the intense riffing that permeates much of the of the rest of the album, this is a work of subtlety and depth that demands attention for the entirety of its near nine minutes’ length. Rumbling drums, ambient swells, strings, and some wonderfully delicate vocals from Rundle provide an intense and all enveloping lull, and then, those waves of sludgy guitars come crashing down like a mudslide descending on an unsuspecting village. It is epic, and finds both halves of the collaboration finding that essential spark.

Not that this spark isn’t present elsewhere. Between the two outliers are further examples of just how fertile this collaboration has been. Monolith is a thunderous, almost punky tune, the kind of thing you’d expect the Hell’s Angels Roadroller Chapter to enjoy. And Out Of Existence might just be the album’s defining moment. Rundle’s delicate vocals sit in an atmospheric pocket of chiming guitar at the song’s outset before Funck’s roar comes hurtling into view on the back of a thunderous riff. From here the song twists and morphs, thrashing through various forms of existence, at times delicate, sometimes cacophonous, sometimes proggy, it’s all here. Despite packing so much into barely four minutes, it doesn’t ever feel confused, just absolutely masterful.

Ancestral Recall veers back and forth between quiet and bombastic passages, but this is not your archetypal quiet-loud-quiet template. Instead it feels like a conversation between two opposing forces of nature. Magickal Cost is the kind of thing Kate Bush and Peter Gabriel might have come up with, had they been massive fans of Neurosis and Carcass. It’s all about ebb and flow, power and restraint, and floods of emotion layered over delicate guitars and thunderous riffs. That Thou and Rundle can cover so much ground in such a short space of time is nothing short of miraculous.

When you’re hearing these songs for the first time, they feel like they stretch on for hours. Not because they’re tedious, but because they slow time down and have so many great ideas thrown into the mix. Not once does this ever feel forced or that they’ve thrown too much into the mix. Their chambers are full, certainly; let’s hope there’s more in reserve.