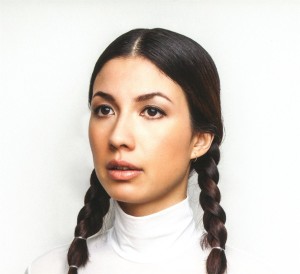 It’s been almost five years since we last heard from Emma-Lee Moss, aka Emmy The Great, back when she released her second album, Virtue. As that album detailed (in sometimes painfully personal terms) the break-up of the relationship with her fiance after he found religion and decided to dedicate his life to the church, it’s understandable that she may have wanted to take some time off.

During those five years, she’s lived in various cities, including Los Angeles, New York and her native Hong Kong, and that restlessness is nicely evoked on her new record. Second Love, as its title suggests with the nod to Moss’ debut First Love, is about growing, evolving and exploring new avenues – while the songs are as winsome and affecting as ever, there’s a much richer musical soundscape on display.

For Second Love shows how far Moss has come since her early days of acoustic-based songwriting – there’s a rich, warm sound enveloping all of Second Love which still glows through repeated listening. Opening track Swimming Pool is a good example of this – full of gently echoing guitar reverb and spacey synths, it’s gently wistful and when Wild Beasts‘ Tom Fleming appears with his unmistakable baritone, it’s enough to send shivers up and down your spine.

It’s an album that’s full of surprises, whether it be the icy synth minimalism of Dance W Me (featuring Beth Jeans Houghton of Du Blonde on backing vocals) or the lovely spiralling guitars and close  harmonies in the introduction to the gorgeously sad Constantly. Even the tracks which hark back to Moss’ earlier days, such as Never Go Home or the touching Phoenixes have an edge and muscularity to them which you may not have necessarily associated with Emmy The Great previously.

And, as ever, she’s on top form lyrically throughout the album. There’s a preoccupation with the effects of technology on human relationships; Hyperlink talks of a “cafe where the drinks costs more than music” inhabited by people who are “tapping keys where once they would read magazines”, while Social Halo seems to address social alienation, a tale of fractured relationships in a social media dominated world where “everything’s moving so close”.

Moss is at her best when she’s at her most personal – so the aforementioned Phoenixes is an undoubted highlight, a lovely touching tale of female teenage friendship, a world dominated by Bliss magazine and River Phoenix posters, while Less Than Three has a more vitriolic edge, telling an ex-boyfriend about “the shit you’ve been feeding me”. Each track reads more like a poem than a song, with clever little lyrical twists revealing themselves on repeated listens.

Second Love pays off most of all on those repeated listens – it’s not her most immediate collection of songs, but over time they reveal themselves to be her most rewarding. It’s been a long five year wait for all Emmy The Great fans, but Second Love is likely to leave the vast majority more than satisfied.