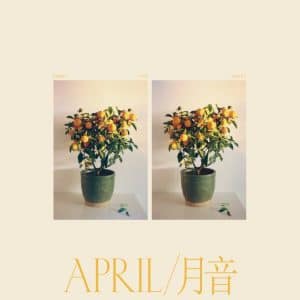 Emma-Lee Moss (or Emmy The Great as she’s otherwise known)’s fourth album was recorded in a two week burst of creativity back in 2018, when the singer visited her family in Hong Kong. At the time, Moss was living in New York, and there’s a strong sense throughout April/月音’s 10 tracks of someone looking to reconnect with their roots.

Recorded before the 2019 pro-democracy protests in Hong Kong, much of April/月音 feels almost a period piece – representing the peaceful, carefree calm before the chaos of the present descended onto the island (and the world in general). It also feels like a conscious start of a new era for Moss herself: once the chronicler of disintegrating relationships – her second album, Virtue, is practically a masterclass of a break-up album – now a settled parent bringing up a newborn daughter, she’s almost turned into a travel writer for this album.

In fact, Hong Kong is pretty much a character itself on April/月音. There are snatches of lyrics sung in Cantonese, while some songs like Okinawa/Ubud are almost cinematic in their instrumentation, transporting the listener to a world of bustling markets and tranquil temples.

Best of all are the little stories that Moss sprinkles through the album. Mary is a particular highlight, a bouncy little gem that tells the tale of a particularly doomy fortune teller: “The fortune teller told me my life was bound to fail… but in the end, none of it came true.” Writer is a sometimes surreal journey through a creative purple patch, including musings on a dead husband (“I thought, that’s a shame, I would have liked to seen him again”).

Dandelions/Liminal has a lovely strut to it that recalls prime Belle and Sebastian at times, and is an uplifting ode to reassurance that it’s ok to be uncertain about your choices in life (“Are you looking for straight lines in these liminal days, come on let’s be dandelions, scattered all over the place”). Many of the songs have alternative titles, a nod to the theme of dual identity that is so entrenched in the history of Hong Kong.

The production is also something that raises the album to another level. Produced by Moss herself, together with Bea Artola and Dani Markham, there are plenty of subtle orchestral arrangements, such as on album centrepiece Chang-E and some lovely touches of xylophone and organ on the sad, yearning Your Hallucinations.

The general pace is measured and stately, with only the guitars and doo-wop backing vocals of Hollywood Road/April and the driving A Window/O’Keefe providing a departure from the blissful melancholia which seeps through the album as a whole. It may not be a record that grabs you by the scruff of the neck, but its quiet, understated nature demonstrates an artist confidently setting off on a new chapter in her career.