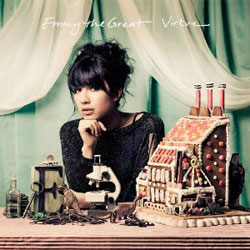 Folk artist Emma Lee Moss’ debut record, First Love, was a fascinating, spiky folk record that marked the emergence of a real lyrical talent. Dealing with everything from pregnancy scares to fatal car crashes, it was a wordy, perhaps slightly overlong piece shot through with pitch-black humour and coruscating self-examination. It almost felt like a talented young poet ironing out the creative creases as they went along – not perfect (and musically rather charmingly low-fi) but with a clutch of jaw-dropping moments. One criticism that could be levelled against her older work is that it was sometimes a little too self-referential and faux-naive – it would be easy to dismiss it as twee and throwaway until you spent a little time discovering its much smarter heart.

In the two years since First Love was released, Moss seems to have matured substantially, both musically and, as quickly becomes apparent, emotionally. Virtue is a record born out of crushing heartbreak, a constant presence that flits between the lines of the record, with one aching elephant-in-the-room slaying at the end. Without wanting to pick over the bones too much (the album deals with it as subtly as you would expect from such a gifted songwriter) the album’s title and preoccupation with religious iconography are intrinsic to the story.

Funded by fan donations, and released through the group’s own label Close Harbour, it is an expansive, complex piece of work over which Moss, her producer Gareth Jones and musical partner Euan Hinshelwood have obviously toiled long and hard. While sometimes First Love sounded like a writer in search of a song, here she has found a musical backing as interesting as her lyrics – each of the 10 songs is a very individual beast, but with a coherent, confident authorial voice running through it. From the swooning, discordant opening to first track Dinosaur Sex to the lush, keening lament of North this is as varied and constantly surprising as any record by a UK singer-songwriter this year.

It strikes a perfect line between immediate and slow-burning – there are a numerous moments of stunning pop that leap out on first listen (the dreamy, beautiful surf guitars of Sylvia and the shiver-inducing chant of Paper Forest) but Virtue is a record that rewards repeat listens. It can be a little difficult to devote your full attention to both the intricate lyrics and the music on first pass, and Dinosaur Sex and Exit Night/ Juliet’s Theme suffer slightly from being a little too subtle. The former is the sole nod to the quirky persona cultivated on First Love, and it only becomes apparent that it’s actually an affecting metaphor about moving forwards into an uncertain future after a few listens. Give it time, however, and you won’t be able to tear it away from your iPod.

Much of the record deals with being left behind and fumbling to make sense of it, struggling to impose a narrative over something incomprehensible. It isn’t damning it with faint praise to also call it a staunchly feminist record, one in which at least half of the songs are named after women, and address female characters who’re lost in the world. The simple, heartfelt Cassandra is perhaps most on-the-nose about this – “I know it’s awful, I know it’s bruising… but still the world turns on its axis” doesn’t come across as an ersatz girl power platitude, but as a confident, kind acceptance that the world can be a shitty, confusing place sometimes, but you aren’t alone. Where before you might have expected her to make a snide comment skewering someone’s self involvement, Virtue is a literate, kind understanding of what it’s like to grow up too quickly.

Despite this being a ‘breakup’ record, it never descends into a mire of Red House Painters-level despair. In fact, it’s relatively upbeat – as she says in the incredible Paper Forest, (an emotional punch to the gut) “I’m blessed… I’m not unlucky, I was just born this way”. One can only hope the cautiously hopeful, grateful tone of Virtue is mirrored in a spike in popularity for this special record, and this very special young artist.