Empire Of The Sun – Ice On The Dune 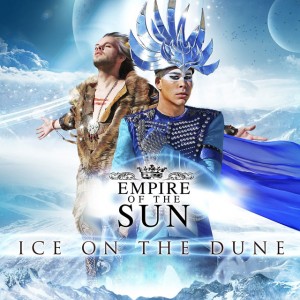 Empire Of The Sun’s debut album Walking On A Dream was something of a surprise international hit when it was released in 2008, and was a long time coming for the Australian duo of The Sleepy Jackson visionary Luke Steele and Nick Littlemore of Pnau. Now, they are faced with the challenge of expectation. Ice On The Dune is a follow up that meets that challenge wholeheartedly, but offers a different kind of joy than their debut – and one that is only sporadically fulfilling.

There is more to Empire Of The Sun than a collaboration between two ambitious musicians. Empire Of The Sun is something far bigger than that. Littlemore and Steele have built up a fantastical mythical world of creation and positivity. The duo’s entire image, persona and concept is predicated on a sense of grandeur and theatricality. The world that they have created is a world where anything is possible. That’s the overarching message that defines Ice On The Dune. The resultant album is bigger, bolder and even more fanciful than what has gone before.

Ostensibly, the album is the second part of the story of Empire Of The Sun. It’s a supposedly mythical tale about The Emperor and The Lord (Steele and Littlemore transported to their own singular dream world). The accompanying press release details each song as individual scenes in the theatrical performance. The songs themselves are all characterised by an incredibly bright and vivid synth pop rush. There is a fantastical jouissance to songs like DNA with its fevered proclamations that “It’s all about discovery”. The overpowering joy of a song like Alive is undeniable. There’s an endearing purity to the rousing chorus hook of “Loving every minute because you make me feel so alive”. The lyrics may often veer into clichéd platitudes but when aligned to melodies like this along with the energy they possess they become something bigger and more important.

The album sounds incredibly well produced. However, the bludgeoning effect of many of the pulsating electro pop songs soon becomes wearing. There is little room for nuance or subtlety. As a result, whatever story or overarching theme that they attempt to tell becomes lost in the stampede of kick drums and synth hooks. Far better are the few songs that allow the melodies time to breathe.

Perhaps the best aspect of Empire Of The Sun is Luke Steele’s distinctive voice. The best songs here are the reflective ballads that allow his voice to truly take centre stage. I’ll Be Around is a lovely sashaying ballad on which Steele’s voice carefully caresses the thankfully soft-focus synths as he whispers the lyrics. It’s a welcome moment of restraint. Just as effective is closer Keep A Watch, a song described by the duo as something of a coda to the story of the album, the end point of the journey. It takes the form of an emotive torch song sung by Steele and best encompasses the duo’s ideas of hope, positivity and idealism, and leads to a lovely moment when the Harlem Gospel Choir joins Steele’s voice in a stirring crescendo.

Ice On The Dune is a natural progression for Empire Of The Sun as they seek to ascend to the next level of their highly conceptual stylised pop. There are frequent echoes of a kind of modern day ELO operating using Calvin Harris style synth hooks. It’s a collision between trad pop ambition and modern day production sounds. The result isn’t as satisfying as is hoped though. The songs and melodies may be brighter, but there is a nagging sense throughout that something special has been lost somewhere in the process.