Empire Of The Sun – Walking On A Dream 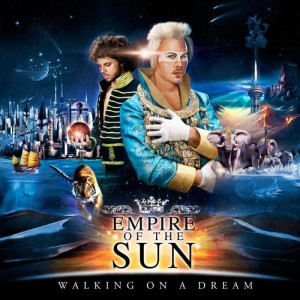 It doesn’t take a degree in semiotics to work out what’s going on with the cover art to Empire Of The Sun’s debut Walking On A Dream. Otherworldly and ethereal? Check. It’s there in the space age backdrop and the references to Star Wars. Theatrical? But of course, just look at those outfits and the make-up. Pretentious? Naturelement. One of them is gazing into a crystal ball, for godsakes. Spectacular? Well, it has its moments.

Empire Of The Sun, already a Top 10 success in their native Australia, are made up of Luke Steele and Nick Littlemore. The former may ring a few bells seeing as he’s the founding member of psych-rockers The Sleepy Jackson, a band whose notoriety stems more from Steele’s habit of sacking band members then it does the music. In fact, their last album – which we will refer to simply as Personality for the sake of space – was so wilfully obscure that many thought Steele had finally gone completely bonkers. Empire Of The Sun it seems is his way of indulging that more theatrical side. And in Littlemore (from little-known dance act Pnau) he seems to have (finally) found the perfect counterpoint.

Despite the eccentric artwork and elaborate outfits, Walking On A Dream offers little in the way of musical experimentation. The main touchstone is a kind of blissed-out, 1970s vibe, all sunny acoustic strums and lazy vocals in a high register. Most of it sounds like a strange amalgam of Fleetwood Mac and MGMT, as if the latter had been transposed from the slightly grubby streets of Brooklyn to the beaches of Australia. For the most part, it works a treat, the title track and We Are The People particular highlights.

Utilizing a limited palette of acoustic guitar, soft padded drums and 2009’s instrument du annee, the synth, the band manage to create breezy, melodic songs that ask for little in the way of concentration but offer ample rewards over time. Half Mast, in particular, is brilliant summer pop, a bouncy keyboard riff and a wonderful falsetto chorus could see it become this year’s festival soundtrack.

Unfortunately, the album suffers badly in its second half, the incessant hooks and melodies drying up in favour of unnecessary noodling. Delta Bay is an odd amalgam of glam rock and the Chipmunks whilst The World sounds like something you’d hear in a shop selling spiritual trinkets and tarot cards. Things are rescued somewhat by the genuinely bonkers Swordfish Hotkiss Night, which sees Steele try his hand at rapping.

Tipped by many in those ‘Big in 2009’ polls, Empire Of The Sun are an interesting prospect, and one that feels achingly ‘now’, despite the retrogressive nature of the music. With Luke Steele’s ear for melody still intact and with a foil to keep his eccentricities pretty much in check, there’s a good chance they’ll be one of this year’s sleeper hits. It’s obvious that they’ve spent a while cultivating a specific look, but they seem to have only spent half of that time on the album. Still, for the first four songs it’s difficult not to be right there with them, floating around in their spaceship, blasting out Fleetwood Mac.