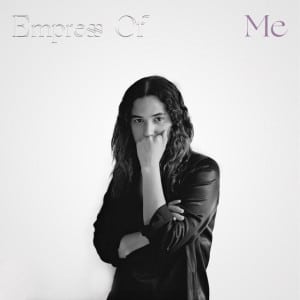 Empress Of is the musical moniker of Brooklyn-based musician Lorely Rodriguez. She emerged back in 2012, when a series of synth-pop single releases led her to be labelled ‘the new Grimes’. Rodriguez took her time over Empress Of’s début full length, finally released in September of this year.

Rodriguez’s earlier releases tallied with the then-fashionable chillwave produced by the likes of Neon Indian, Washed Out and Purity Ring. Me, however, is far more direct and danceable than her earlier work. This is an album built from insistent, catchy hooks, its 10 concise songs dragged left-of-centre by some unconventional arrangements and some judiciously-deployed vocal acrobatics.

Opening track Everything Is You begins with gamelan-like keyboards and finger clicks before a barrage of skittering percussion bends the song alluringly out of shape. It’s followed by Water Water, which sounds like what would happen if Calvin Harris ever discovered the joys of a reverb pedal. It’s tremendously exciting.

Standard and Kitty Kat are wholly successful exercises in avant R&B; the former sounds like a poppier fka twigs while the latter features gigantic keyboard riffs that wheeze and wilt around words of snarling self-empowerment (“Don’t kitty kat me like I’m just your pussy”). The chorus of Threat resembles a beefier version of Yazoo’s Don’t Go, while Need Myself’s insistent melody is backed by a shapeshifting arrangement that’s alternately delicate and booming. Next to these toweringly strong numbers, the relatively straightforward How Do You Do It and To Get By can’t help but feel a bit underwritten and flimsy.

Me was mostly composed on a solo trip to Mexico City and, as the album’s title suggests, the lyrics feel intensely personal. Need Myself doubles as a brush-off to an oppressive lover and a paean to self-love (“can I get up off of my knees / and find a reason to leave home” … “I just need myself to love myself”). Make Up is an intimate portrayal of sexual chemistry (“nothing comes between us but a piece of latex / when you tear my clothes off / like I was a pay cheque”) while Standard appears to conflate financial penury with relationship problems (“I’ve been living below the standard / while you struggle holding on … See the distance that comes between us / isn’t measured by the weight of gold”).

Me is a brilliantly confident album that fulfils – and builds upon – Rodriguez’s early promise. Recommended.

Empress Of MP3s or CDs

Empress Of on Spotify

More on Empress Of
Empress Of – Me