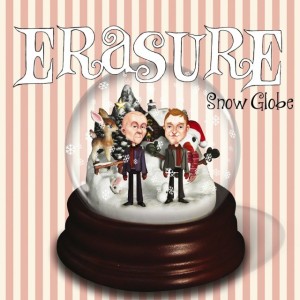 It’s hard to know how to approach Snow Globe, ostensibly the 15th studio album from synth-pop legends Erasure. Is it a record in its own right, or is it a nice little oddity that back in the ’90s would probably have come in the post as a ‘fan club only’ release, lovingly wrapped up in sparkly paper and dusted with icing?

As a mish-mash of cover versions of Christmas songs mixed in with brand new compositions, it feels all at once like a bit of both, and neither – a fact that sadly works chiefly to the album’s detriment. Back in 2007 when Erasure released the remarkable Light At The End Of The World, following quickly on from 2005’s Nightbird, it felt like the makings of a golden new era for the duo – but in 2013, after the lacklustre Tomorrow’s World and now this, it’s starting to feel like Erasure are stuck in reverse.

The album isn’t without a few silver linings though; Bells Of Love is a strong opener, succeeding through virtue of subverting any overtly Christmassy message and placing the importance back on just being a great bit of synth-pop. It’s nice to see Erasure back to their rubbery, analogue palette after the misguided push at more digital, modern sounds on previous album Tomorrow’s World. Likewise, the sleek mid-tempo pulse of Make It Wonderful is excellent – the kind of darkly mature electro-ballad Erasure have always been able to craft so very well.

The same, unfortunately, can’t be said of the band’s cover of Latin-choral classic Gaudete. To call the duo’s take on the number an acquired taste would be an understatement, which makes its status as the album’s ‘lead single’ even more baffling. Whilst Erasure have more than their fair share of great cover versions in their repertoire (look no further than their Abba-esque EP or 2003’s Solsbury Hill) this time they hit a bum note – Gaudete, whilst possessing a certain novelty charm, veers dangerously close to pulling the whole album into disposable ‘bit of a seasonal lark-about’ territory. The less said about the bizarre chip-tune rework of The Christmas Song (you know, the one about chestnuts roasting on an open fire) the better.

Later on in the record, Loving Man and There’ll Be No Tomorrow serve to redress the balance a little; glossy synth-disco numbers that place Erasure firmly back where they’ve arguably always functioned best – on the dancefloor, beneath the endless turn of the glitter ball. There’s an unrepressed glee to these moments that serves as a much-needed tonic to the rather studied, stifled feel of the Christmas covers.

There’s some great stuff amongst the original material on Snow Globe, but it’s impossible to shake off the feeling this whole project would have been better if those select finer moments were culled out from the seasonal covers to instead form the core of a ‘proper’ new studio album. Andy Bell and Vince Clarke are still a formidable creative partnership, which in many ways makes Erasure’s slip into a nadir of mainstream irrelevance all the more frustrating in a year when peers like the Pet Shop Boys and Depeche Mode are touring arenas and putting out some of the strongest albums of their careers.

But Snow Globe, for all its charm, isn’t the record to re-instate their importance. Instead, it feels destined to languish in the oeuvre of vaguely interesting ‘alternative’ Christmas albums, a curious and largely un-needed appendage on the career of a duo that still feel like they have one truly great album left in them somewhere. When said album might appear is anyone’s guess.