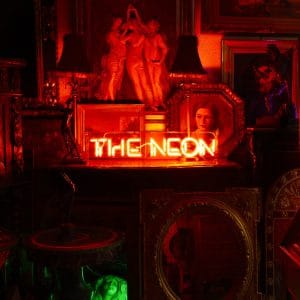 Few bands have enjoyed the longevity of Erasure, even if many may have lost track of them down the years. Since the mid 1980s, they’ve consistently put out decent albums, with The Neon becoming their 18th studio effort, a staggering feat considering how few synthpop bands at the top of their game back then have managed to retain anything near the level they originally set themselves.

But perhaps Vince Clarke and Andy Bell are different in many respects. There are only two of them for a start, so a split is less likely. In fact, according to Bell, the pair only meet up once every year or two, so not being in each other’s faces surely helps. They have no weight of expectation, either; their heyday is generally seen as being back in the ’90s when they released a run of top collections after a solid start in the ’80s, so they have nothing to prove to anyone other than respond to the question: Can they still do the business? Given Clarke’s genius, the answer is foregone.

2017’s World Be Gone was a little less upbeat than might have been expected, and their latest tacks in a similar direction. The Neon is supposedly a “place that lives in the imagination” and God’s Own Junkyard in Walthamstow, being choc-a-bloc full of neon signs, captured the mood perfectly for the album cover. The musical content, though, is nowhere near as glitzy and glamorous. And it is split into two quite distinct halves.

The first is, without a doubt, stronger. Clarke has always had an ability to conjure a catchy tune, and the catchiness of the first five songs is irrepressible. The lyrics to opener Hey Now (Think I’ve Got A Feeling) – also a single – tell of donning warpaint to deal with a difficult situation, while Nerves Of Steel has a slight Kraftwerk edge to the electronics: the chorus is superb, despite an inkling of Thompson Twins’ Doctor! Doctor! Fallen Angel is poppier though not excessively so, supporting the theory that this is a side of Erasure that you want much, much more of if you were never that enamoured with their biggest hits like Sometimes. The pace slows for No Point In Tripping, but its bubbliness is crystal clear and the bridge is to die for as it leads to a chorus of “Baby come on, you’re the one I need”. Shot A Satellite completes the set with another relationship cut, sleazy undertones in the lyrics stating “You spin a web of love for me, as you’re seducing me”.

Following such a strong first half would always be tough, yet the remainder is far from bad. Diamond Lies sounds a little more like the Erasure of the airwaves – it’s certainly not revelatory – and Careful What I Try To Do is also more aligned to the old days. New Horizons employs gentle piano melodies with Bell’s vocals sounding simply divine this time, but there is an uncanny resemblance in the piano work to the soundtrack of Kindergarten Cop, and no one – barring Arnie, perhaps – wants that. Closer Kid You’re Not Alone raises an eyebrow too: its keyboard tones may seem more furnished than most of the other tracks but it’s a dead ringer for Celine Dion’s Titanic theme My Heart Will Go On.

According to Clarke, both he and Bell were in a good place spiritually for The Neon, and it shows. The album may not carry the sort of dance-fused electro-pop magnificence they’ve made before, but moving away from the more ‘expected’ type of pop song you think of when Erasure crops up in conversation seems to have worked wonders.