by Ben Hogwood
published: 22 May 2017 in Album Reviews
Tweet 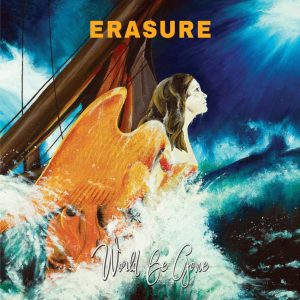 Anger is an energy. John Lydon’s war cry has rarely been so true than in 2017, where we find long-established pop acts reacting to world events through albums of unexpected rage. Vince Clarke’s former group Depeche Mode unveiled their own bruising encounter, Spirit, and now here he is back with Andy Bell as Erasure doing the very same. The warnings were there when musicOMH spoke with Clarke in November, when he pondered that “this time around it seems that there is so much bad stuff, there’s loads to write about”.

In contrast to most current political outfits, World Be Gone finds Erasure delivering exactly what their manifesto promised. It’s not an easy listen though. Bookending the 10 tracks are Love You To The Sky and Just A Little Love, easing the strife a little. The former is up there with one of their best singles in recent years, a lover’s paean over a large battery of drums. The latter – in the same ‘pure’ key of C major incidentally – emerges from the wreckage of Bell and Clarke’s soul searching, declaring that “just a little love and the world keeps turning”.

The rest of the album is unlike anything Erasure have ever done before. Bell’s voice carries particularly raw feeling, its serrated edges roughing up the slow tempo songs and turning them into genuinely anguished ballads. Oh What A World and Lousy Sum Of Nothing get to the nub of the matter, railing against Donald Trump and Brexit in thinly veiled verses of anger and resentment. As a Transatlantic duo Erasure are well placed to air their views, and Oh What A World considers how “no-one out there wants to see the things I see”. Lousy Sum Of Nothing goes one step further. In amongst the despair of fake news and lies, Bell addresses the powers that be – and us – directly. “You’re not going to criticize the injustice in the world?” he sings accusingly. “How do you feel now, saying look me in the eye?”

Before that there is A Bitter Parting, with “such sweet sorrow”, which could even be shedding a tear for the outgoing Barack Obama. Yet Bell’s voice sounds odd here, as though he’s swallowed a wasp. The approach undoubtedly gives his lyrical delivery an arresting timbre, but it feels like a manipulation too far. Sweet Summer Loving offers a little respite, but even there Bell wonders “how did you rekindle my breathless flame, memories that cut me like a knife”. Clarke responds with an ominous, recurring chord, its presence a dark undercurrent to the song.

Incidentally in this and several other numbers Bell’s vocals resemble another Clarke collaborator, Alison Moyet, and through the desolation and bitterness of Still It’s Not Over and Take Me Out Of Myself he delivers a powerful and truly heartfelt performance. The vocal manipulations remain, but the music is stripped back. The rhythms are almost incidental rather than driving the songs, the spotlight brightly focused on the powerful lyrics.

Whether you like Erasure’s 17th studio album will depend on how you feel about facing the world, in its current state, in the mirror. Musically it is not their strongest, but this is one such occasion where the lyrics overpower almost everything. The big pop moments will no doubt be back along the way, as hinted at by the resolution of Just A Little Love, but here there is a sullen, downcast attitude. Full credit should be given for bringing an extra dimension to the Erasure legacy, but World Be Gone makes for far from easy listening.