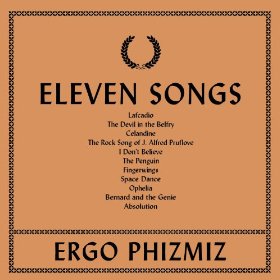 Ergo Phizmiz is something of a renaissance man. His website labels him a “radio producer, collagist, writer, composer, and filmmaker, who has worked across radio plays, installations, opera, songwriting, animations, and performance”. 2010’s album Things To Do And Make was a collection of 11 slightly madcap songs, and Eleven Songs is, in that respect, a pleasing continuation.

One surprising change is in the quality of the recording, which is sometimes just poor. Not poor in the ‘yeah, cool man, low budget’ way. Poor in the ‘GCSE music’ way, something not evident on Things To Do And Make. Phizmiz’s blog suggests that it was a deliberate decision to make it sound so, and certainly, it marks the sound of this effort out from others by Phizmiz and most contemporary recordings. Considering the musical riches on offer, however, it wouldn’t have done the record any harm to polish it up a bit. One suspects that this might have been too predictable for Phizmiz.

But despite that minor (and admittedly snobby) gripe, Eleven Songs is a dark, amusing and engaging record. The whimsical ghost of The Beatles hangs over the album, but it might just be a surprise to hear such straightforwardly well-written pop music. Having said that, the organ textures and the surrealism on Eleven Songs set Phizmiz up on territory well covered in the 1960s, and it works for him.

Eleven Songs is, for much of its duration, a deliberately creepy affair. The fairly typical Devil In The Belfry sees Phizmiz intoning “Come along, join me in a little walk up the winding staircase” in a quaint manner somehow suggestive of violence and the listener’s impending doom. A comical turn on the woodblock makes the whole thing more, not less, scary. That doesn’t mean it’s not funny, though, despite the trauma of the chorus: “I tried so hard to forget about it.”

It’s not all so blackly shaded. On Fingerwings, Phizmiz finds an effectively beautiful melody and sparsely backs it with odd harmonies and chiming plucked strings. When your fingers start to grow wings, apparently “many things will start to make sense that haven’t made sense before”. It would be nice to live in Ergo Phizmiz’s head for a day or two. It’s very obviously alive with ambitious and self-consciously strange ideas that still hover some distance back from being totally pretentious. And it’s probably quite a funny place to be.

After several listens, it’s hard to tell whether the Ergo Phizmiz is joking with the listener or ridiculing him, kindly or otherwise. It’s also possible that he’s being deadly serious, and it’s entirely possible to take both sides of the album away without contradiction. One of the quiet highlights of the musical year.