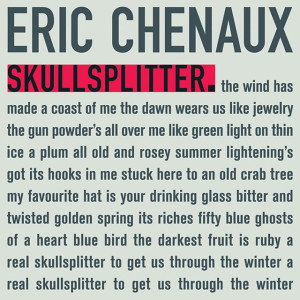 When the word experimental is applied to music, it is all too easy to imagine some kind of unlistenable horrific noise terrorism that isn’t quite as clever as it thinks it is. Cut from a different cloth entirely, Eric Chenaux’s delicate and deft approach creates utterly beautiful and beguiling songs. Few musicians, experimental or otherwise come close.

Skullsplitter might have a title more in common with death metal, but its contents are far from brutal. Instead, these nine songs possess a hazy, soft focus quality that opens doors to dreamworlds. They might well allow the mind to wander and for the imagination to run free, but there’s little in the way of bone crunching going on.

The album opens with a re-working of an old song. Have I Lost My Eyes? first appeared in 2008 on the Sloppy Ground album. As an introduction to Chenaux’s style, it is perfect. Its discombobulating guitar work is baffling at first; woozy doesn’t quite cover it. The guitar tones swell, swirl and oscillate, as they swing in and out of focus. As the song progresses, his gorgeous Antony meets Jeff Buckley toned voice gives the song some kind of narrative structure. There’s something quite peculiar about the juxtaposition of his delicate and controlled vocals and the barely conscious guitar that backs them. Vocally Chenaux is focused, if emotive, instrumentally however, he’s ghostlike and strange. The song’s unsteady nature feels not unlike that comfortable feeling that can only be achieved by a heavy night out on the tiles followed by a contented slump onto a warm and welcoming bed and an embracing of the fact that the room is spinning in a most entertaining manner.

This slightly drunk, uneven feeling permeates many of the songs on Skullsplitter, but its strengths lie in the intimacy that these recordings possess. Each songs sounds as if it is being played in a smoke filled jazz bar for an audience of just one, it’s a similar feel to the one achieved by Vincent Gallo on his album When. With such an open and warm atmosphere at the heart of the album, it is perhaps unsurprising that Chenaux takes the opportunity to explore some of his older material in detail. The song Skullsplitter first appeared on Dull Lights in 2006, here it gets stripped back to a spiritual lament and is all the more affecting. My Romance is not a new song in his repertoire either, but the version here, with its spellbinding bent out of shape guitars practically mewling, is quite enchanting.

When not examining his past, he is exploring time itself and attempting to bend it using his unique approach to guitar. A trio of songs, Spring Has Been A Long Time Coming, Poor Time, and Summer & Time address the theme directly. Spring Has Been A Long Time Coming is essentially a folk song that combines shimmering guitar lines and warming drones with a vocal tinged with sadness. Poor Time lurches like a broken clock, the guitars lines creating a peculiar collage of sound for Chenaux to sing over delightfully. The delightful Summer & Time is a quite gorgeous jazz croon that appears to be steeped in soft golden sunlight. It feels like an attempt to preserve a day forever, a song to prevent the sun setting and the day ending.

Time is essential to appreciate this album fully. The textures and tones of each song take time to unfurl and make sense, but once enveloped in Chenaux’s peculiar world, it’s difficult to leave. Each song is so comforting, peaceful and downright beautiful that it’s like being lost in a wonderful auditory dream.