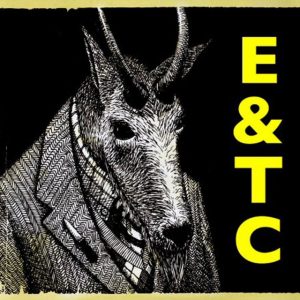 Erland & The Carnival is something of a supergroup. Filling out Orcadian Erland Cooper‘s band are the considerable talents of Simon Tong (ex-The Verve and The Good, The Bad & The Queen) and David Nock (drummer from Paul McCartney‘s The Fireman). Not only is his band comprised of well seasoned musicians, but many of the influences and lyrics contained on the self-titled album are adapted from traditional folk tunes and contemporary artists.

As it turns out, Erland has done his homework, not just cutting his teeth at raucous folk nights but also tirelessly researching his subject; and it shows. Opening things with a take on an old Scottish ballad, Love Is A Killing Thing, the band shows a lot of promise. A medieval hymnal start soon develops a jaunty gait, complete with keyboard accompaniment that sounds like the last dying gasps of a deflating balloon. As it roars towards a gratuitously noisy mid-section, it’s easy to admire the development of a song which started out as if it could be sung in a church and ends by invoking the fires of hell.

My Name Is Carnival, the Jackson C Frank song that gave the band their name, retains a folk feel but also indulges in a ’60s garage sound that drips with reverb and slightly sinister keyboard interjections. Exciting stuff indeed.

But then things go slightly awry. You Don’t Have To Be Lonely may well tick the box marked “carnival” but it also tries far too hard to be quirky. If The Doors ever opened a circus whose only act was Ray Manzarek playing a Wurlitzer whilst Bobby Krieger and Jim did a polka through 20 yards of elephant dung, it might sound like this.

Perhaps coincidentally, The Doors are present in spirit all over the album. They’re in the rolling rhythms that push along the strange duet of Everything Came Too Easy which somehow stuffs Joe 90 into a Wicker Man. Manzarek looms large in the fine keyboard work that graces many of these songs, while Jim Morrison’s influence can be found in the vocals of Erland himself. Perhaps there’s something of a shamanic connection at work in the Carnival somewhere.

Trouble In Mind mixes Belle and Sebastian with The Coral but, despite swiping a Bruce Springsteen lyric and a lick from The Doors once again, it just doesn’t quite cut it.

The celtic angle is covered with Tramps And Hawkers, a song most associated with The Dubliners. Unfortunately there’s little here to suggest that it might become known as a song made famous by Erland & The Carnival, passing as it does in a rather uninspired death march.

A song inspired by a tragic recent suicide could reasonably be expected to be a fairly dour affair. However with The Derby Ram the band take this tale of a jumper, egged on by mobile phone waving meatheads, and make something strangely upbeat. It gains extra marks for some interesting keyboards, electronics and some neatly sarcastic lyrics culled from a folk song about a mythical giant sheep.

The Sweeter The Girl The Harder I Fall is a return to the ’60s Garage influence that is apparent over much of the album, and its perky backing vocals and brilliantly seething keyboards make for a thoroughly nostalgic listen, even if you’re 15 and you’ve only ever seen the likes of Joe Meek or The Flies on YouTube. Likewise Gentle Gwen places The Shadows slap bang in the middle of a pagan fertility rite. A heady mix, and one that would probably give Cliff Richard nightmares for the rest of his life, but it works.

The album finishes up with The Echoing Green, a much more contemporary affair, with a distinct bass line and neat use of loops and electronics. It might be based on a William Blake poem, but after an album that, for much of its duration, wears its folk roots on its sleeve, this is a welcome diversion.

Erland And The Carnival is, at its best, an intriguing listen, and one which mixes British music’s past (at least 500 years worth of past at that) with contemporary themes and American influences. The results might not always work – the dreary Disturbed This Morning, for example – but when they do, it is almost always exciting. By no means is this a classic album, but there are plenty of worthwhile moments to be had.