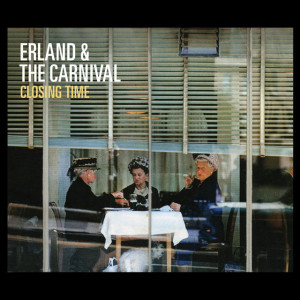 The young Orkney folk singer Erland Cooper and veteran indie rock guitarist/keyboardist Simon Tong (The Verve, The Good The Bad & The Queen and Gorillaz) have made fruitful use of their disparate musical backgrounds since forming Erland & The Carnival eight years ago. Their well-received eponymous debut album in 2010 featured traditional folk songs re-created within a psychedelic rock style, followed the next year by Nightingale which had a similar vibe but with more completely original songs. In 2012 the pair collaborated with singer-songwriter Hannah Peel on the folklore side project Orkney: Symphony Of The Magnetic North.

Now, Erland & The Carnival are back, but on their third album Closing Time their sound has evolved. Some of the muted melancholy of The Magnetic North (inspired by the remote beauty of the Scottish island’s landscape) seems to have seeped into this new work, which is more subdued and introspective then the band’s earlier work, while the songs are less folksy or trippy and more personal.

Although there are some beautiful string arrangements, overall the production has been stripped down, moving away from the previous spooky organ and swirling synths to create an intimate, reflective album with haunting melodies in minor key. Like the natural rhythms of the seasons and life cycle it references, Closing Time is a grower. The opening title track begins in downbeat mood as it describes the end of a relationship –“Time to get you out of my mind” – but ends with a hint of hope – “I can feel the summer” – as you can almost feel the rays of sun breaking through with the shimmering strings.

Wrong starts with folksy mandolin and develops into another sad love song with a yearning quality: “Don’t come back / Until you realise what you have lost.” First single Quiet Love is about the old dilemma of ‘can’t live with you, can’t live without you’ – “I quite like to be alone / I don’t mind where I fall” – featuring a bittersweet string arrangement and Paul Weller singing high-pitched sha-la-la backing vocals. In I Am Joan a few moments of unsettling fuzziness break into its melodic mellowness, while the atmospheric, piano-led Radiation has whispering backing vocals and ends with some eerie sound effects.

Is It Long ’Til It’s Over picks up the pace with a rumbling bass line, and the more upbeat tempo is maintained in second single Birth Of A Nation, where indeed the mood lifts too as Erland sings hopefully: “I always want to believe in other worlds / Filled with all the people that you love.” That’s The Way It Should Have Begun begins with heartbeat-like drumming gradually getting louder and finishes with distorted fragments of sound, as the singer bemoans: “I’ve been through this heartbreak before and it’s numb / I just don’t know where the feeling has gone.” They’re Talking About You Again boasts an impassioned vocal performance and lovely acoustic guitar phrasing.

With disarming tenderness Erland reflects on becoming a father for the first time in Daughter, as a piano tune of childlike simplicity tails off into gentle birdsong – an appropriately understated way to end this quietly impressive album.