by Alan Ashton-Smith
published: 29 May 2020 in Album Reviews
Tweet 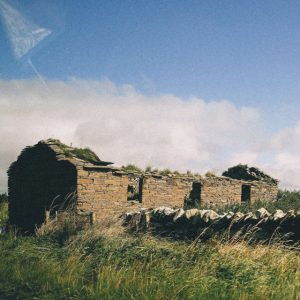 Aged 19, Erland Cooper was the archetypal country boy headed for the big city. He left his native Orkney for the first time and travelled to New York, before settling in London. Having followed that trajectory, plenty of young men all but forget the places where they grew up but, alongside running a recording studio in London, Cooper has maintained a deep connection to Orkney. Now, more than two decades after he set sail for Aberdeen, leaving his home island behind him, he completes a trilogy of records about Orkney.

The first of this trilogy was Solan Goose – the title is the Orcadian name for the gannet – an album inspired by the birds of Orkney, many of them seabirds. It was followed by Sule Skerry, an homage to the sea named after a remote islet and lighthouse in the North Atlantic. Hether Blether is about the land and people of Orkney, and as such it’s a more complex album than the previous two, dealing not just with the natural world but with how humans have interacted with it.

Musically, it feels both more ambitious and more accessible than Solan Goose or Sule Skerry, and this is both to its credit and its detriment. Cooper treads and occasionally crosses a fine line between eclectic charm and disorientating hodgepodge (the limited edition vinyl release includes a map of Orkney, which might assist listeners who become lost between its grooves). The previous two albums were more coherent: both primarily instrumental, leaning towards ambient and classical music, the great adoptive Orcadian composer Peter Maxwell Davies being a particular influence. But Hether Blether has a wider musical scope.

Solan Goose and Sule Skerry featured snippets of spoken word which added colour and detail; here the extensive passages of speech feel more integral, something woven into the tapestry of the album. Indeed, Hether Blether opens with a track that is based around spoken passages. Noup Head incorporates poetry by John Burnside, read by musician Kathryn Joseph. There is more of Burnside’s poetry in Longhope, which also features Joseph along with Japanese synth players Hiroshi Ebina and Hinako Omori, and what sounds like snatches of an interview with an elderly denizen of Stromness.

In contrast to those collage-like tracks, Hether Blether also includes a few more straightforward songs than anything Cooper included in the first two parts of his Orkney triptych. Peedie Breeks is a lovely song of youth and hope – the title, literally meaning ‘short trousers’ is a local word for children – in which raindrop-like synths dance around an understated string arrangement.

The other more typically songlike tracks are also the most direct, personal and heartfelt pieces here. Where I Am Is Here closes the album, and the trilogy, with a simple piano motif over which Cooper repeats the phrase “Love now more than ever”. The production has a scratchy, faded quality suggesting both loss and preservation and nicely reflecting the ways in which people work both with and against the landscapes they inhabit. The title track is another piano-led song and has similar emotional qualities: “You gave me all the best days of my life, even then I didn’t know it then,” Cooper sings in its chorus.

But earlier in the track he sings, “From time to time you rise out of the sea,” and this refers to the hidden isle of Hether Blether, a vanishing island which in Orkney folklore rises from the sea only occasionally. Here, and throughout the album, Cooper’s personal ties to Orkney intertwine with the myths and legends of the islands, and thus with the personal ties of anyone else who has been touched by those myths and legends. In this way, Hether Blether indirectly illustrates the way that a community is formed over generations through interactions with both the present and the past.