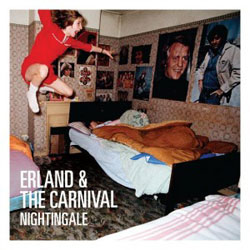 Folk – in its most traditional form – can be a bit of a marmite genre. But Erland & The Carnival feel like a band who, irrespective of preference, create songs that show how objectively good they are at their craft.

That is what made the band’s self titled album from 2010 such a compelling listen – and Nightingale follows on from where it left off. This time though, instead of lovingly refurbishing folkloric songs and poems, these thoroughly British gents have written their own material from scratch. And while some of it retreads unnecessary ground from the debut, there are new moments of freakish wizardry and enchantment in their music.

The band are Erland Cooper – a folk guitarist and singer from the remote Scottish island of Orkney, ex The Verve, Blur and The Good, The Bad and The Queen guitarist, Simon Tong, plus dummer, David Nock, formerly of The Orb and Paul McCartney‘s The Fireman.

Map Of An Englishman is the first foray into a heavier and more produced sound, and is one of the band’s best tracks to date. Named after a piece of artwork from Grayson Perry, beneath its unfamiliar surface lies the characteristic nuts and bolts of whirring Wurlitzers and plodding rhythms, delivered upon a glorious musical wave that’s quite easy to be swept away upon.

If The Coral were the brothers of Frankenstein ‘s monster, they would probably have come up with something as weird and wonderful as Emmeline, complete with its horror house crescendo. And sixties influences from The Doors on I’m Not Really Here are so bold that you’d half expect to find their smudged fingerprints over the instruments.

In Nightingale, Erland & The Carnival take an Alice In Wonderland journey, delving into the curious, from dreamlike, to dark, nightmarish moments. I Wish I Wish is as wispy as it is odd, playing with rhythm to give the track an impossible sounding complexity that dances against the simplicity of the storytelling. Maddening Donnie Darko moments surface on Springtime and there’s also room for kaleidoscope Sergeant Pepper and marching bands on Wealldie.

The band say they recorded the album in the bowels of a ship moored on the Thames. Cabin fever aside, the heart wrenching love stories of Nightingale and East & West must have benefitted from solitary confinement, as the loss sounds all the more beautiful, especially in its stripped down state.

The latter end of the album palpably strays too far into obscurity – too far, that is, except for The Trees They Grow So High, which is wonderfully obscure. Like the present you hadn’t noticed behind the tree on Boxing Day, it comes as a bolt out of the blue with acid trippy lyrics, mixed with shoegazey folk that isn’t afraid to flirt with an experimental electronica beat.

Nightingale has a definite progression in sound from the debut – it’s darker, more varied, and more surreal. Whether the one is better than the other feels like a moot point for this band; the earlier was an exercise in lovingly bringing to life forgotten folk verses, yet this new offering had entirely different parameters in starting from scratch. In fact it’s this that makes Nightingale such a majestic, natural step, by virtue of the fact that while it’s so complex and accessible, it’s the genuine article.