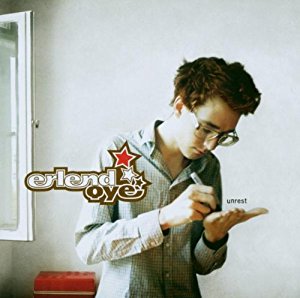 Erlend Øye made his name with Norwegian downbeat folk duo, Kings Of Convenience, who thanks to a couple of unlikely remixes found themselves the toast of Ibiza. Vocal duties with fellow Norwegians Röyksopp further cemented his reputation, and it is this more electronic sound that he’s explored on his debut album. Packing away his guitar, he has embarked on a trip around the world and collaborated with probably the hottest leftfield dance producers of the day.

Whether Erlend himself personally chose who to work with, or it was the work of some canny A+R man, someone deserves to be congratulated on their good taste and choices. For anyone connected with electronic music the ten artists would constitute a dream list of people to work with. From the absurdly talented Scott Herron (aka Prefuse 73) to the man of the moment Morgan Geist, every one of these are talented artists in their own right.

The album has a defiantly ’80s edge to it, with most of the tracks easily fitting into a bouncy electro synth pop mould, with just a hint of Cameo lurking. Holding all the slight variations together is Erlend’s soft melancholy voice, which can infuse even the poppiest track with a deep yearning.

It really is quite beautiful stuff- even without the vocals I’d love this album. All the producers turn in variations of perfect electro pop, from Mr Velcro Fastener‘s booming electro to Prefuse 73’s take on some kind of ’80s electro-funk-rap hybrid. With the addition of the vocals, you end up with that rare thing, a ‘dance’ album that welcomes repeated listening.

Whilst purists, whether they be of the dance or indie/folk/downbeat variety, may turn their nose up at some of this, such snobbery would be a huge mistake. And it’s early days yet, but Unrest should be in contention for one of the albums of the year. Expertly crafted pure pop, but without a hint of cheese surrounding it, it’s a blueprint for what the music of the future should be – one eye on the past but definitely moving forwards.

More on Erlend Oye
Erlend Øye: “I’ve lived in London, and in Manchester. People in the north are warmer” – Interview
Erlend Øye – Unrest