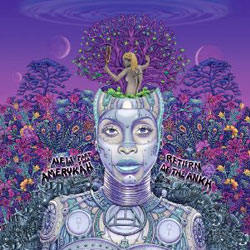 Erykah Badu emerged in 1997 with her masterful debut album Baduizm. Together with D’Angelo‘s Brown Sugar and Maxwell‘s Urban Hang Suite, it formed the vanguard of the burgeoning ‘neo-soul’ movement. Baduizm was effortlessly sophisticated and – while Badu was clearly in thrall to the likes of Billie Holiday – utterly contemporary.

Since then Badu’s career has followed a similar trajectory to those of her neo-soul peers. She hasn’t released very much music in the last 13 years, but what she has released has been increasingly weird. Her most recent record – the first New Amerykah album, 4th World War – was the weirdest of all: kaleidoscopic, a little bit crazy but also pretty amazing.

Advance word suggested Return Of The Ankh would be the concise, accessible flipside to the sprawling 4th World War, and advance word was right. The smooth sound of first single Window Seat recalls those elegant early hits On And On and Appletree. It also provides a good indicator of what to expect from the rest of Return Of The Ankh, as its warm, organic sound proves the rule, rather than the exception, on an album that’s comfortably Badu’s most easily-digestible since Baduizm.

Return Of The Ankh looks to the future while doffing a respectful cap towards its ’60s and ’70s influences. The squelchy keyboard sounds of Turn Me Away (Get Munny) recall Stevie Wonder‘s Fulfillingness’ First Finale. The funky backbone of Gone Baby Don’t Be Long is provided by the unlikeliest of sources: a sample of a Wings track, Arrow Through Me. Elsewhere, hip-hop producers Madlib and the late J Dilla make excellent contributions – the former provides the celebratory Umm Hmm and the harp-driven instrumental Incense, while Dilla’s Love is a casually brilliant funk number.

In contrast to 4th World War – which touched upon thorny subjects like drug dependency, Hurricane Katrina and the Nation of Islam to occasionally bewildering effect – Return Of The Ankh’s focus is personal rather than political. Badu’s lyrics convey easily-identifiable emotions and situations, mostly concerning the subject of love.

Window Seat is a prime example. It begins with Badu yearning the reclusiveness offered by the seat of the title – “Don’t want nobody next to me / I just want a chance to fly / A chance to cry”. But by the time we arrive at the thrilling handclap and footstomp-assisted breakdown, Badu has traded passivity for the desperateness of the newly-dumped – “I need you to want me / I need you to miss me / I need your attention / I need you next to me”, she implores. Elsewhere, Fall In Love offers passive-aggressive, ‘I’m damaged goods’ sentiment; 10-minute closer Out Of Mind Just In Time plots heartache across three musical movements, while Love is, frankly, a come-on.

Those who admired the experimentation of New Amerykah’s first instalment might consider Part Two a retreat into Badu’s comfort zone. But Badu remains a singular, refreshingly unpolished talent. That much is evident on You Loving Me, a minute-long jam about drinking gin and “fucking your friend” which tends to suggest she’s not going to turn into Alicia Keys anytime soon. Marvellous stuff.