Esben And The Witch – A New Nature 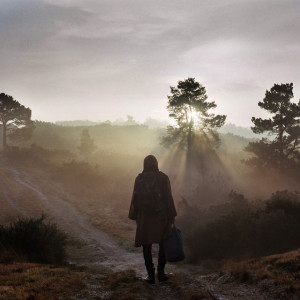 In 1987, a crack guitarist was sent to prison by a military court for a crime he didn’t commit. This man promptly escaped from a maximum security stockade to the Chicago underground. Today, still wanted by the government, he survives as a Producer of fortune. If you have a record, if no one else can help, and if you can find him, maybe you can hire … The Albini Team.

Exterior. Dusty town on the edge of nowhere. Two figures stand staring out into the middle distance.

“Oh Rachel. What are we going to do? Since those folks at Matador stopped supporting us things have been hard. If we don’t get a new record out soon, I really fear for us.”

“Patience, dear Daniel. We know we’ve got something. We just need to find someone who’ll take what we’ve done over the last couple of albums and add teeth. Big, white, sharp, teeth.”

A third person runs up.

Rachel reaches down and pulls out a sack of money. Hands it over

“Here it is. The last of the cash raised through our Pledge drive. Use it wisely.”

Interior. Studio. Band set up. Play Press Heavenwards. The song begins drenched in a creepy fog, before what had been a spidery guitar suddenly turns dark and brutal, before another twist, sending the track careering forward with a grinding relentless intent. Albini sits, watches. The band finish.

“What we’ve taken the intricately atmospheric music that we were always good at making and simplify it. There are less electronics. So it’s less cerebral. More visceral. We’re aiming for something dramatic.”

Albini nods. In walks a jester. He looks depressed and hungry. Albini looks sad. Goes to offer him a drink

They play another song. It is astonishing. Tribal drums tumble onwards, leading a section where a solitary saxophone sounds the loneliest lament, before concluding in blistering, breathless fashion

“That was Jungle. Yes, it’s 15 minutes long. It sounds much like being chased through dense undergrowth by Godspeed You! Black Emperor. I mean, I don’t want to brag, but really think we’ve got the hang of this loud, quiet, loud, quiet, apocalypse type thing.”

The band play Dig Your Fingers In. It starts off akin to the skeletal Victorian folk of White Chalk-era PJ Harvey and ends up staring into an noisy abyss of feedback and distortion. Albini stands up. Nods

“And last, here is No Dog. Now we know it is pretty special. We may have first recorded it on the split record we put out with Thought Forms earlier this year, but with your input, it can kick even harder.”

They start. The guitar sounds like an enraged elephant. An avalanche of drums hit with unspeakable force, before in stalks the bass with a score to settle. It is primal, unhinged and utterly brilliant. Albini walks over to the catering trolley. Picks up a gooseberry custard, looks at it and tuts

Albini sits back down, the band look at him anxiously.

Albini pulls out a cigar from the top pocket of his safari suit. Looks at the end thoughtfully and bites down. Strikes a match

“I love it when a plan comes together.”

Esben And The Witch MP3s or CDs

Esben And The Witch on Spotify