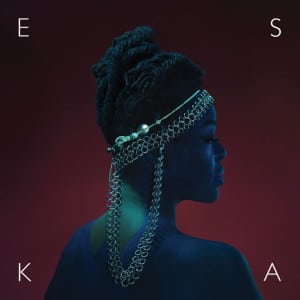 Eska Mtungwazi is often presented as ‘the best singer you’ve never heard of’ – but for those in the know, this debut album has been a long time coming. Her work with Matthew Herbert and Tony Allen (amongst others) introduced her as an inventive and original singer able to glide effortlessly through a variety of musical worlds. Her own projects have been distinctive and compelling (notably the English Skies concert series, with its thoughtful development and expansion of folk music concepts).

Her solo debut, in spite of being frustratingly brief at just 36 minutes, is characteristically wide-ranging. It incorporates some crispy, crackling reggae (Heroes & Villains), beautifully honest and emotive songwriting (a closing mini-suite of songs perhaps in memory of absent friends or past lovers) and kaleidoscopic, global folk music (This Is How A Garden Grows, She’s In The Flowers).

Long term fans might be disappointed that a 10 track album includes two tracks already released on the Gatekeeper EP (the title track and She’s In The Flowers), but it’s hard to argue against their inclusion on grounds of sheer quality. Gatekeeper still sounds revelatory – a detailed tapestry of sound blending multi-tracked vocals, electronics, fluttering vocals at once delicate and authoritative (showcasing depth and range), and a gracefully expanding, vertically linear structure that ends in something close to ascension, the music evolving to support the increasing power in Eska’s vocal. She’s In The Flowers is fascinating in the way it merges an English folk tradition with a West African rhythmic quality, finding the common ground between these forms. It achieves an agile, dancing quality with real drive whilst also being delightfully light and minimal.

Some tracks here are more introspective and questioning and, appropriately enough, are less immediate. At its start, Boundaries feels controlled but with its promise to ‘tear down the walls’, Eska’s vocal veers away from melancholy hues and becomes more assertive. The music is unusual, intricately arranged and challenging in the twists and turns of its melody. It’s too passionate and complex to be an infectious song – but it is a compelling example of Eska’s artistry. This Is How A Garden Grows is wonderful – beginning with auspicious chirping and whirring (the sounds of instruments coming to life does indeed suggest a garden just beginning to bloom) before evolving into an elegant piece melding acoustic folk storytelling with more soulful elements.

Eska counterbalances these elaborate mood pieces with some quirky pop songs. Shades Of Blue is bouncy and urgent (and the ‘baby baby’ backing vocals could even come from a Beyonce record), but it’s unusual time signature shifts (over which Eska shapes effortless, gracefully gliding vocal lines). Heroes & Villains is the album’s closest thing to an earworm and the closing Dear Eddy is a powerful and affecting soul song that feels honest and unforced – a song born from experience.

For some artists, a debut gestating for five years using various producers and covering wide musical terrain might lead to incongruity at best or disaster at worst. Not only has Eska survived these possible pitfalls, but she has transformed them into virtues. The gestation has meant that the album really captures her individual voice as a writer and singer whilst the variety in the instrumentation and sound presents her as an open-minded seeker of new ideas.