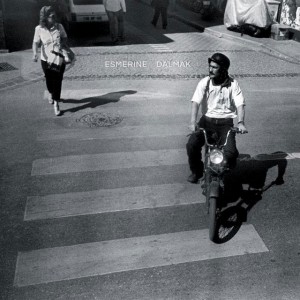 As might be expected from Esmerine, a band that features members of Godspeed You! Black Emperor (Bruce Cawdron) and Thee Silver Mount Zion (Rebecca Foon), Dalmak is a dense, intriguing, and overall, utterly spellbinding listen. The band has expanded recently bringing Jamie Thompson and Brian Sanderson into the fold, giving them greater flexibility; Thompson’s percussive work over the course of the album is nothing short of inspired.

The genesis of Dalmak began following a successful European tour, when the band was invited to take an artist in residency position in Istanbul. Immersed in the culture and sounds of the city, it was inevitable perhaps that Foon and Cawdron would draw on the experience for their music.

The word Dalmak means to dive in to, or immersion and the influence of Istanbul on the sound of the band is clear from the outset. They not only take on the musical signifiers of Instanbul, but the album makes full use of authentic instrumentation and local musicians too. Bendir, darbuka, erbane, barama, saz, and the quite brilliantly named meh are all added into the mix, alongside more familiar instrumentation such as banjo, electric guitar and of course Foon’s evocative cello.

Opening with the swooning classical cadences of Learning To Crawl, the influence of Istanbul is not immediately apparent to the untrained ear. The sheer depth of sound however is quite breathtaking however with aching violins and a mournful cello setting the mood wonderfully. It’s only when Lost River Blues I begins that Istanbul begins to make itself fully felt as it drifts through an ambient meditation. Wooden percussion provides a clattering beat as the band evoke a shimmering heat, like summer rain on cobbled streets. It only really bursts into life with introduction of Lost River Blues II which suddenly injects more pace and energy, as if the city has burst into life after a period of dormancy. At times it is almost militaristic, particularly in terms of percussion, but somehow that only adds to the excitement.

Barn Board Fire is perhaps the most accessible track here. Vibrant and energetic right from the off, it drops any notions of sadness that have flavoured previous tracks (most notably the cello motif at the heart of Lost River Blues I) and indulges in something that borders on the celebratory. There’s slight aggression in the repeated refrain perhaps, but there’s something almost joyous in the beats, a hypnotic call to dance; the musical equivalent of a punch up at a wedding.

Following the somewhat darkened drone of Hayale Dalmak, Translator’s Clos I & II return to more traditional fare. At times bordering on contemporary sounds, there are moments when it could be construed as pop music. Indeed these particular tracks break away from the ambient moods found elsewhere and pulse with jubilant life. That it occasionally sounds like Secret Chiefs 3 is a particular bonus. White Pine leaves the bustle of Turkey behind and explores a different world entirely.

The percussive guitar line might well reference the beat of Lost River Blues, but the droning strings are in a different place altogether. Somewhere not bound by place. The glorious tinkling sway of Yavri Yavri compliments White Pine perfectly, providing the light to its darkness. The vocals retain the Eastern feel that pervades much of the album, but there’s more space here than elsewhere on Dalmak. There’s no bustling cities or wild parties spiralling out of control; instead it’s far more peaceful and elegant.