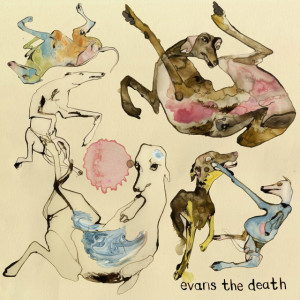 How satisfying it is to hear a band grow into their sound, the awkward edges cornered off, the hesitant moments confidently filled. And it’s even more satisfying when that sound doesn’t take them down the easiest route.

Despite being signed to legendary indiepop label Fortuna POP!, Londoners Evans The Death have honed a sound that owes more to ’90s alt-rock and britpop than the twee, C86 leanings of their labelmates. Their first, self titled record came out in 2012 when the band were barely out of school.

A lot’s happened since then, so the delay the title of their second release offers a tongue-in-cheek apology for, is understandable. Bassist Alanna McArdle left to concentrate on her other band, Joanna Gruesome, for a start. But, as anyone who’s seen the band’s undeniably chaotic and, at times, shambolic, live shows will well be able to imagine, they dusted themselves down, regrouped and took the time to pull everything back together again.

To say they’ve perfected their sound isn’t to suggest they’ve lost any of the lo-fi charm and attitude that made the first album such a delight. Expect Delays is dirty, scuzzy; it picks out the grungier elements of britpop, flings some postpunk at it, with crunching, industrial guitars juxtaposing Whitaker’s brattish but gently spat out vocals. They lay their cards on the table with Intrinsic Grey, which is surely one of the best opening tracks of 2015;it hurtles along with layers of fuzz and distortion. With its irresistibly catchy chorus, it could easily be a long lost Elastica track.

Bad Year’s jangly guitars belong in the long-dead toilet venues of north London, while Just 60,000 More Days Til I Die and the record’s title track see them revel in their woes with a dark, wry humour, the latter’s Suede-alike posturing sees Whitaker note: “So young, so brave, someone threw themselves into the track again, I really should drive but I just don’t trust myself with the lives of others”.

Perhaps echoing the original britpoppers, there’s an underlying sense of being pissed off at their generation’s lot. Idiot Buttons starts with the sound of cans being cracked open before Whitaker talks of waking up drunk and aimlessly lying in the bath and muses: “I can’t explain these gaps in my employment history/ I’m an idiot for trying.” Elsewhere songs touch on alcoholism, bad relationships and general helplesness. It sounds bleak, and it is. But it’s also defiant; it swigs from a can of warm lager, rolls up its checked shirt sleeves, prepares a cigarette and snarls at anyone who dares to glance in its direction.

Most of that snarling comes courtesy of Whitaker, whose vocals steer their best tracks away from being sprawling jams. On one hand she sounds like she couldn’t care less, on the other she’s pleading for attention; take Sledgehammer’s lusty, drawn-out chorus, which flirts with and taunts the listener with a pouty one fingered salute.

Of course it’s not flawless. Like their previous record, there are fillers to be found here, but they’re fewer in number – and they’re usually their slower, downbeat tracks that lose their way to the sprawling guitars that characterised much of their first record. But let’s not close on a down note. The delays were worth it; Evans The Death have come of age and produced an album that sounds like them, only lots, lots better.

Evans The Death MP3s or CDs

Evans The Death on Spotify