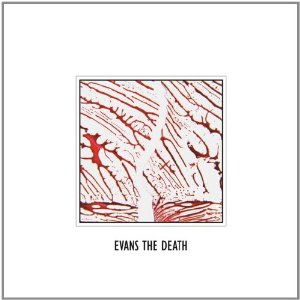 Fortuna POP! boss Sean Price reckons Evans The Death have the potential to do anything they want. As the band’s label manager, he would say that, of course – you never hear of such a figure proudly announcing their artists will be playing the toilet circuit forever and a day. Yet there’s a certain wilful precociousness about Evans The Death that has undoubted appeal. Naming your band after a character in a Dylan Thomas piece (an undertaker in Under Milk Wood, if you were wondering), and having a début single that references the simultaneously revered and feared Northern mid-’80s nuclear winter drama Threads acts as unequivocal evidence of their self-belief and adds a sense of decidedly British individuality.

The album is one of that’s as frenetic as it is instant, melodic and catchy. Take early track Catching A Cold as an example, which blasts out of the traps sounding like the best thing that evergreen late ’80s indie darlings The Primitives never recorded. Elsewhere the galloping recent single shows that despite this only being the group’s début effort their talents for producing a soaring chorus are already well established, and I’m So Unclean sounds like Laura Marling fronting The Ramones – something which works far, far better than it ever should do on paper.

The quieter moments demonstrate that Evans The Death are far from a one trick pony, with slow burners Letter Of Complaint and album closing You’re Joking showcasing a nuanced school of songwriting beyond the scuzz-pop battering ram found on singles. Production from Rory Atwell (whose portfolio also boasts Veronica Falls and The Vaccines) seems to instinctively draw the musical focal points to the fore, be it the trebly hooks on the uptempo tracks, or Katherine Whitaker’s vocals on the slower moments.

Lyrically the album details life’s more run-of-the-mill (or if you’re feeling especially uncharitable, downright mundane) moments, be it not wanting to go out (Letter Of Complaint), making sandwiches (I’m So Unclean) or emotional dependence (Wet Blanket). Under many, less talented musicians such topics could come across as uninspired, trite even. Yet such is the vigour and conviction in the music that surrounds, they themes merely become part of the charm.

With the likes of Tigercats, The Cribs and Los Campesinos! already making more than their fair share of high energy guitar-based pop it would be easy for this record to have slipped by largely unnoticed. The fact it not only stands its own, but stands out is testament to the quality of songwriting contains within. Hopefully helping the Fortuna POP! Label to finally shed its inaccurate twee associations, Evans The Death have proved on their vibrant début that they’re not ready to go about digging their own grave just yet. Long may it continue.

Evans The Death MP3s or CDs

Evans The Death on Spotify