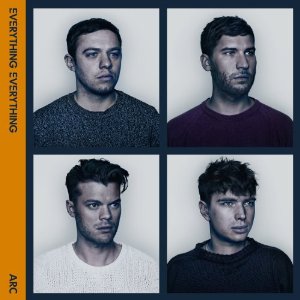 “There were reasons to get out of my bed” sings Jonathan Higgs at the start of Feet For Hands, quite reasonably. Then a second or so later, for no apparent reason, he adds “eh”, r’n’b style.

Now look at Jonathan Higgs. Look at him. He’s there, on the top left of the album cover. Look at his face. Does he, for a moment, look like he could convincingly trot out r’n’b tropes without looking like Martin Freeman singing Jumpin Jumpin at a karaoke party? Does it look, for that matter, like the face of a man taller than about 5’6″? The answer to both those questions is of course “no”, and that is why Arc is such a great album and Everything Everything are the most exciting indie band in the country right now.

Not much makes sense in the world of Everything Everything, least of all the lyrics. The claim of making a simpler emotional connection here than on their debut Man Alive is not an idle one – the opening line of Duet (“Do you feel left behind, like there’s something not right?”) might as well be Jessie J connecting with the kids. But then she’d be unlikely to follow it up with “there were fistfuls of hair round the foot of my chair”. Or claim that she could be “the dolphin of your dreams”. Or ever use the word “genuflecting”. Occasionally, various words threaten to coalesce into a message – Cough Cough deals with the corrosive power of money, and Radiant carries themes of knowledge and science – but it’s a clever or deluded soul who can claim to be vastly the wiser.

Musically, it’s a far more confident and consistent affair than their debut, which dragged somewhat after a strong start. The songs, driven by glitchy processed beats and thunderous percussion that recalls These New Puritans, get to the point quickly and have lost the previous tendency to ramble on a little to long. Opening salvo Cough Cough and Kemosabe are packed full of catchy little vocal runs and stutters, and each boast a soaring falsetto chorus. In fact, the only real fault on the album is the tendency of songs to follow the same formula of intricate tongue-twisting verse followed by an epic melodic chorus full of wist and soul – which wears a little thin on a less stellar tune like Armourland.

It’s when they deviate from that formula that the results are most thrilling. Undrowned is the nursery rhyme Oh Dear, What Can The Matter Be? sung by a man having a nervous breakdown, and features an array of perfectly formed internal rhymes like “The people in parliament don’t know the half of it”. This House Is Dust is the sound of a bagpiper also having a nervous breakdown, and ends on a genuinely desolate note, Higgs quietly singing “this is all my life” to a sparse piano accompaniment.

Radiant’s gigantic, ringing refrain recalls second-album Foals except with less aversion to the grandiose, and the heart-stopping pause before the crescendoing verse spills into the chorus shows in a single second their mastery of songwriting craft. The Peaks is reminiscent of the middle section of Man Alive’s Qwerty Finger, swollen into a wailing, wondrous song of its own. Duet stands just a toupee’s breadth above the others, beginning with intricate violin lines underpinning mournful vocal lines that intertwine and build to an ear-mangling climax, the percussion abandoning the intricacies of previous tracks for a glorious four-to-the-floor stomp.

But the vital ingredient here is not the songs but the performance of Higgs, holding it all together with a falsetto croon that drips not with golden honey but thickly-spread marmite, dividing opinions with every vocal inflection and tic. Resolutely uncool, he somehow retains an attractive everyman demeanour despite the obstinately eccentric genre-hopping music he figureheads – he’s neither foul-mouthed greasy-haired indie-rock yob nor urban minstrel with sob story tattooed to neck. There’s neither swag nor swagger here, just talent and a single-minded creative vision worth every gasping breath it takes to keep up with.