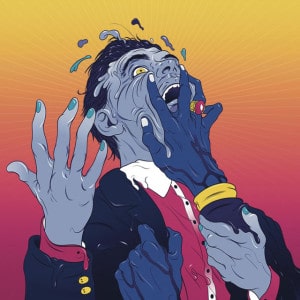 What is it with Manchester and warehouses? Clearly they inspire music and escapism in equal measure. The Haçienda is an obvious case in point – though it may be stretching things a bit to call it a warehouse – but it’s tempting to think Everything Everything had it in mind when they too decamped to a warehouse in the city to record Get To Heaven.

The comparison is deliberate, because while this, the band’s third album, is a celebration of past, present and future, its most obvious moments feel like recollections of Manchester clubbing, trussed up on the production desk of Stuart Price. The single Distant Past is an ode to the era of dance music when it was acceptable to use all your available fingers in the production of massive keyboard riffs. The band recreate that to thrilling effect, a tricky back beat giving way to the ultimate in 1990s musical throwbacks.

Also looking back is succeeding single Regret, but there are no rose tinted spectacles here, as the song confidently shouts out its punch line before buckling in the chorus. “Did you imagine it in a different way?” asks singer Jonathan Higgs.

By now you will surely have decided on which side of the fence you sit where Higgs and his band’s falsetto vocals are concerned. Even for seasoned listeners it can be overbearing, at times approaching a yelp, but it is never less than distinctive, and there are thrilling episodes of vocal virtuosity between the four.

These are often clever, as though Everything Everything are challenging themselves to include tongue twisters at the highest possible velocity – but on most of the album a meaningful emotional thread runs through the songs, and it is this that ultimately triumphs.

Of those, Fortune 500 beats its chest aggressively, proclaiming obsessively under brooding clouds of how “I’ve won, I’ve won, they’ve told me that I’ve won”, and, rather more sinisterly, “I am compelled to take you by the throat”. The falsetto stretches on No Reptiles, which also bristles with implied violence. “It’s alright to feel like a fat child in a pushchair”, sings Higgs, “old enough to run, old enough to fire a gun”. “Just give me this one night to feel like I might be on the right path”, he pleads as the keyboards surge into the song’s apex.

After this, anyone still of the mind to accuse the band of emotional frigidity will surely be won over by Warm Healer, a song channelling the spirit of Jon Hopkins but expressing itself even more freely, Higgs sounding close to tears in a beautiful and heart melting coda.

Repeated listening to Get To Heaven reveals a number of earworms – the shout of “Regret, regret” on the song of the same name, the vocal call and response on first track Blast Doors, the choruses of Spring/Summer/Winter/Dread (“I don’t want to get older”) and The Wheel (Is Turning Now).

Here, then, is musical proof that clever calculations and emotion can mix. The results may on occasion be fraught with discomfort, and feel like a caffeine overdose, but in that respect Get To Heaven is an accurate reflection of life today, with its overwhelming tags, mentions, likes, unread messages, stimulants and stress relievers. Maybe the four need to adjourn to a different sort of darkened room for their next album.