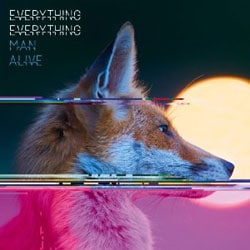 When it comes to a group like Everything Everything, being taken aback is par for the course. Their tight, falsetto-ed sound is unlike anything else out there today – well, apart from Animal Collective in places. Theirs is the sort of music likely to lead fellow musicians to ask themselves: “Why didn’t I think of that?”

Everything Everything aren’t just for show and their work isn’t a formulated, calculated attempt to stir up some new scene. They emerge from Manchester with a debut album to their name in the same year as neighbours Delphic and Hurts, but their sound couldn’t be further removed from either. And why should everything sound the same just because it originated from the same city in northern England, after all?

Sporting successful singles, re-recorded demos and sparkling new efforts, Man Alive is a debut album that should displease no-one. Production aligns with the band’s erratic character, beginning with a rampant opening trio of songs likely to leave you flabbergasted. The old-fashioned joke that Everything Everything live up to their name in every respect won’t be going away any time soon. This is a unique listen.

The slick giant that is My KZ Yr BF opens the album with unrivalled confidence, the worthy high-speed-car-chase soundtrack Qwerty Finger and the frighteningly inventive Schoolin’ following. That’s the listener won over right there. The opening precedes a more diverse two-thirds, blending tenderness and subtleties with unabashed, full-frontal pop.

Jonathan Everything’s vocals switch gloriously from 90 decibel heights to softer hues. His Mancunian-tinged falsetto dictates the altering pace, varying between the vulnerable Leave TheEngine Room to the jerky eccentricity of Photoshop Handsome. As the band ceremoniously walk amongst R&B, a cappella and synth pop, Jonathan sounds comfortable within any surroundings.

The variety on show is one thing. But most impressive is the band’s ability to cross genres in the space of one song; Schoolin’ begins as a candidate for future Justin Timberlake hit before scattering its parts into a cacophonous, sweetly-sung jewel, its previous melody disposed of.

Inevitably, this all leads to an incohesive mess, to some extent. There’s the naivety that strikes many a band when recording a debut album of such energy and experimentation. It’s comparable to Late Of The Pier‘s debut Fantasy Black Channel; a lot on show but with hints of greater achievement. But Man Alive is a step up from that. It could well be their masterpiece; their scatterbrained work of art.

Should everything (everything) go according to plan, Man Alive will cause a shift in the ground. Whilst an abolition of N-Dubz might be too much to ask for, there’s every chance that post-2010 hits will have a rejuvenated feel to them. If however – and this is the more likely of the two – Everything Everything fail to break the higher ranks of the charts, they’ll embed themselves as a cult phenomenon with this debut.