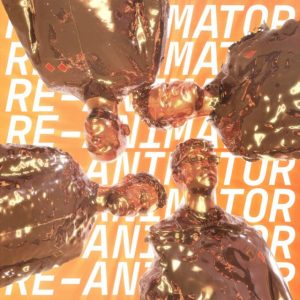 On their sixth album, Everything Everything are exploring the idea of splitting. Don’t be too alarmed – the band remain a committed, single unit – but in the making of Re-Animator singer Jonathan Higgs became preoccupied with the idea of divided selves in his writing process.

You can immediately see how this would work within the quartet. That name, for a start, then the idea of two versus two, not to mention the complex harmonies they use that often inhabit more than one personality in the same musical line.

It all sounds very complicated. And yet, in spite of its intricate genesis, the album turns out to be their most direct yet. The instrumentation is pared back more than on recent long players, meaning the quartet’s vocals are high in the mix for maximum impact. Crucially they don’t take the spotlight too readily, either – again leaving more room around the edges.

On the day lockdown was announced, the band lost most of their musical equipment. A fire at their lock-up was to blame, but from that they found a positive, using the charred instruments in the video for closing track Violent Sun. Rather ominously that song heralds the approach of something terrible – indicative of the underlying feeling of dread that runs through the album. Black Hyena embodies it in the brooding bass regions, but the idea of divided selves is clear in the pure vocals from Higgs.

Songs like It Was A Monstering are further evidence of the stripped back sound, with a dubby beat and some unusual cross-rhythms. The broad bass sounds underpin woozy effects in the middle ground, while Higgs’ voice on occasion takes a similar floated delivery to the Thom Yorke of Paranoid Android. Lord Of The Trapdoor has a similar profile, its broad melodies stretched over a beat that is pulled around, adding extra beats here and there. The chorus pulls back for a brief moment of headiness before dropping headfirst into a swimming pool of distortion.

Big Climb is full of persuasive imagery and harmonies. “There’s a light on the horizon…dancing on the ocean floor”, goes the chorus, with a real tug at the melody. On Planets it’s the music that dances, with shimmering synths and a persuasive triple time rhythm. Best of all is The Actor, another carefully calibrated song that grows intensely as it progresses over a repeating riff. The multi-layered vocals are serene yet speak of a religious devotion, reaching their goal over a sparse beat which fades to nothing.

The ceremonials are brought to an abrupt end in Violent Sun, a dance of death that works itself into something of a frenzy before burning itself out. The parallels to real life events for the band are striking, and they combine to make a darkly dramatic piece of work.

As with each album in the quartet’s canon, Re-Animator requires (and deserves) repeated listening. Once that is achieved then the dividends start to pay, and this darkly shaded album is revealed as a very different string to be added to the Everything Everything bow. The band continue to sound like nothing else around.