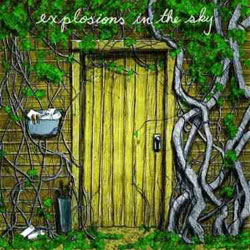 Over five albums, Explosions In The Sky have carved a niche for themselves as creators of post-rock concertos. But in Take Care Take Care Take Care, they’ve created the equivalent of a memorable classical symphony like Dvorak‘s New World – their finest work yet.

Eleven years on from their debut, this Texan four-piece still adopt that same rise and fall; the journey of music without need for verbal storytelling. But guitarists Mark Smith, Munaf Rayani and Michael James and drummer Chris Hrasky have produced a sixth album that doesn’t call the drumkit its master at the peaks, nor does it award the guitar that privilege at its quietest – a factor 2007’s All Of A Sudden I Miss Everyone lacked.

Individual elements don’t feel complex, but their composition is astoundingly swallowing, and there are clever, attentive niblets of sound that add intrigue. Last Known Surroundings’ methodical rhythm is set by a guitar strummed at its strings’ roots, like the squeaking sound on concrete that metallic stiletto footsteps make, while Be Comfortable, Creature’s looping engaged tone guitars make it endearing.

The record feels organic, full and detailed throughout, with surefooted guitar chords that regularly give way to shoegazey, meandering riffs, overplayed by waterfalls of electronic guitars. Explosions In The Sky have a knack of building forests of layers that burst into life. This metaphor for spring is fulfilled by Last Known Surroundings. Its breaks of cradle rocking, plucked guitars lull into sense of quiet, before life suddenly and repeatedly blossoms – like Sigur Rós after a few espressos, or Mogwai on Prozac.

Chris Hrasky’s sensitivity and understanding makes his drumming the heartbeat of the album, both for its aptly-placed near absences as much as its startling presence on Trembling Hands – a track with galloping drums that tussle with sad, Interpol guitars, eventually bursting into joyous melody. Post-rock can often arrive hurdling a wall of noise that unthinkingly places the drummer at the forefront, but Explosions focus more often than not on guitar melody, giving them a subtle epic quality.

It’s this fitting contradiction in terms that Postcard from 1952 illustrates, mushrooming from quiet beginnings with added kicks and trembling crescendos that explode into a conclusion that describes comprehension of impossible things like the speed of light.

Let Me Back In starts seductively, turning into melancholy and then happiness of the sort that forces tears – exquisitely documenting emotion in a post-rock score. These waves repeat, only stronger each time, but each time the hope is that it will be repeated again, stretching out far longer than the 10 minutes the final track allows.

It’s these journeying ebbs and flows that make this both an intensely delicate, yet forceful listen. This isn’t showing off with noise like post-rock can sometimes be accused of; it is, rather, intricate knowledge of how a leaderless band uses its flexibility to craft rises and falls that consume and envelop, making it an essential addition to anyone’s list of 2011 records to own.

Explosions In The Sky MP3s or CDs

Explosions In The Sky on Spotify