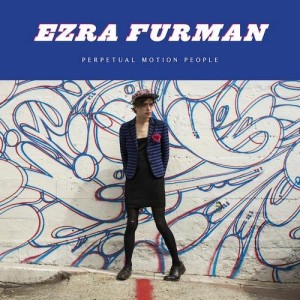 Perpetual Motion People are the “people who feel they can never settle” for whom and by whom this album was made, according to its creator, 28-year-old Chicagoan Ezra Furman, the skittish soul at the centre of the irrepressible, irresistible opener, Restless Year. But the title also seems to speak to something else, a sense of always moving but going nowhere, endlessly revolving on the spot: as Furman sings in Lousy Connection, “there’s nothing happening, and it’s happening too fast”.

Much as its predecessor was sprinkled with the shoop-shoops and saxophones, the harmonies and handclaps of early rock & roll, along with hints of Lou Reed, Jonathan Richman and Violent Femmes’ Gordon Gano, Furman borrows liberally here from musical history to provide settings for his intimate, ingenuous songs. There are doo-wop refrains punctuating Lousy Connection and Haunted Head, Tin Pan Alley ukulele and call and response vocals running through the playfully acerbic Pot Holes and woozy acoustics and bar room piano on the ballad Hour Of Deepest Need, sounding close to falling apart at any moment.

Lyrically, Furman flits between offbeat rabble-rousing, calling for his audience to “tear off your dinner jackets” and “refuse to participate” (Hark! to the Music), defiance in the face of the “social police” that define gender (Body Was Made) and the same fragile, confessional tone that runs through his previous work – “One September in Boston, I lost the will to live…I was so sick of ordinary life” (Ordinary Life). The outlook isn’t wholly bleak, though: there’s hope and ambition in his haunted head and he even accepts, during the wistful Watch You Go By, that he might have a successful career ahead of him in music, if he never finds true happiness!

Ezra is joined again here by his backing band the Boy-Friends, formed after his solo début, the crowd-funded The Year Of No Returning, whose saxophone player Tim Sandusky was a later addition in 2013. Sandusky, who also produced this record and its predecessor, is a key presence throughout, with clean-cut lines evoking diners, drive-ins and jives and the kind of skronking solos that close Wobbly and the boisterous, slow-building penultimate track Can I Sleep in Your Brain?

The latter also underpins Tip Of A Match, a garage-rock call to arms with a big, dumb, slashed speaker of a riff, like The Stooges’ No Fun wearing a grin instead of a sneer. “The apocalypse was supposed to happen before this song,” Ezra admits, but he’s incandescent and “will not admit defeat”; if you’re with him, then “strike yourself on something rough”.

In such a hugely enjoyable and compelling set, the weaker moments are few and far between: the queasily jaunty Wobbly grates a little at first listen and the rawer, darker tones of Day Of The Dog’s Walk On In Darkness and I Wanna Destroy Myself are sadly mostly absent. Overall, Furman has crafted another album to take to your heart: impetuous yet reflective, anarchic but spiritual, nostalgic though always forward thinking.

“I want the universe, God knows I’ve been patient,” demands Furman, and it could be his for the taking. He’s definitely going somewhere, just as long as he doesn’t stop moving.