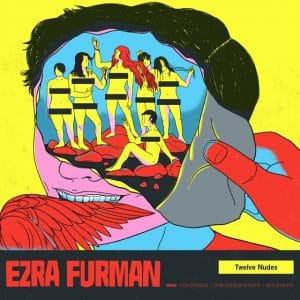 The world appears to be going to Hell, and sometimes you reach a point when all you can do is scream. And it certainly seems like Ezra Furman has reached that point.

Last year’s Transangelic Exodus was a remarkable record, a self-described “queer outlaw saga” which was the closest thing Furman’s yet made to a concept record. For the follow up, Twelve Nudes, he’s gone back to basics. This short (just 28 minutes) sharp shock of an album is garage rock at its rawest, a blast of feedback and screamed vocals that’s boisterous, chaotic and never anything less than completely compelling.

Long term Furman fans will be familiar with this side of the Chicago native – songs like I Wanna Destroy Myself and Tell ‘Em All To Go To Hell were snarly, gritty rock, and Twelve Nudes seems like a return to those days. Opening track Calm Down aka I Should Not Be Alone swaggers in on a rubbery bassline before the distortion really kicks in. There’s a desperation in Furman’s vocals, so scratchy that you fear for the health of his throat at times, and the backing vocals (reminiscent of Sympathy For The Devil) just add to the air of tension.

Rated R Crusaders is similarly gnarly, with an introduction that seems to have been swiped from Nirvana‘s debut album Bleach and becomes ever more manic with each note, while Thermometer is two minutes of power-pop brilliance. Even those are put in the shade by the remarkable Blown, a 56 second number which begins with a full-throated cry of “Trans Power!” and becomes ever more noisy and furious over the short running time.

As you would expect in these times, Twelve Nudes is a defiantly political record, with album highlight I Wanna Be Your Girlfriend discussing transgender issues (Furman, after years of gender fluidity, officially began identifying as trans earlier this year). It’s also one of the quieter moments on the album, enabling us to hear lyrics like “All my friends are writing their resumes, my responsible friends are applying for jobs, but me, I was considering ditching Ezra, and going by Esme – baby, would you find that so odd?”. It’s a rare oasis of calm in an album otherwise defined by its punky chaos.

When the feedback and distortion doesn’t obscure the words, it’s clear that Twelve Nudes contains some of Furman’s finest lyrics yet. In America may sound upbeat and chirpy, but there’s a sad resignation at the heart of it as Furman contemplates the political state of his country: “It’s not so bad in America”, he muses, but the delivery of the lyrics says otherwise. Evening Prayer, by contrast, is a passionate rallying cry to activism: “it is time for the evening prayer, time to do justice for the poor”

It’s a soundtrack for uncertain times, when the only options are to indeed just scream, or as the penultimate track on Twelve Nudes puts it: What Can You Do But Rock N Roll? If we’re going into the abyss, let’s go down screaming.