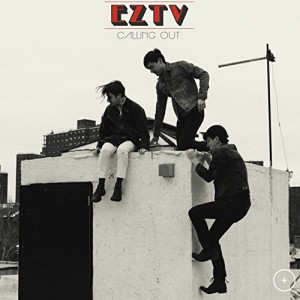 Brooklyn’s EZTV formed when their principal songwriter, singer and guitarist Ezra Tenenbaum needed a bassist and drummer to flesh out some demo recordings he had been making. The trio apparently bonded over a shared love of Teenage Fanclub and Big Star, and it certainly shows. There are a dozen tracks on their début for New York indie Captured Tracks and none veers particularly far outside the lines of that certain kind of breezy, harmonious power-pop.

The album announces itself with crashing cymbals, a chiming riff and some vaguely atonal swooping guitar overdubs that are the first of the few light sprinklings of sonic experimentation across the rest of the tracks. Production duties were handled by Jarvis Taveniere of Brooklyn psych-folkers Woods, and he and Tenenbaum, also a studio engineer, have obviously taken a lot of time over the sound: almost every song features multiple layers of guitar parts, with barely a bar of Shane O’Connell and Michael Stasiak’s bass and drums left unadorned by a lightly strummed acoustic here or a pealing double-stopped lick there.

After the mid-tempo first track Bury Your Heart, the pace picks up with the driving Pretty Torn Up, with hints of Tom Petty and Gallic soft-rockers Phoenix. Following the surf guitars and lightly psychedelic touches of lead single The Light, lovelorn early highlight Hard to Believe marries another ringing George Harrison-alike guitar part to lackadaisical vocals that oddly – for a Brooklynite – recall Euros Childs of Carmarthen’s Gorky’s Zygotic Mynci.

Elsewhere, the appropriately titled Soft Tension finds Richard Thompson-esque folkish fills pulling gently against the bittersweetly laidback strum, while the standout Dust In The Sky has a muted, percussive verse that bursts out into a giddily uplifting phased chorus.

Of Trampoline, Tenenbaum has said that it was written at a time when he was besotted with R.E.M.‘s Murmur and indeed there are Buckish arpeggios springing out here and all over Calling Out. Long Way To Go and That’s Where You Belong round off the record, the former an amiable nod to 1960s harmony pop forebears like The Hollies and the latter a hat-tip in the direction of the Fanclub.

If this is all coming across as a little formulaic, that might be because it is; there are only so many words for ‘jangle,’ after all, and there are occasional moments where influences are worn a little too prominently on sleeves – Everything Was Changing’s verse riff seems to have fallen off the back of The Stone Roses’ Waterfall, for instance. But it’s also almost immediately obvious that this is a band perfectly aware of its antecedents, in love with both the past and the possibilities of what they do (rather like the Roses, then) and at its best this is a confident début that will doubtless please lovers of hooky, carefully crafted guitar pop.

More on EZTV
EZTV – Calling Out