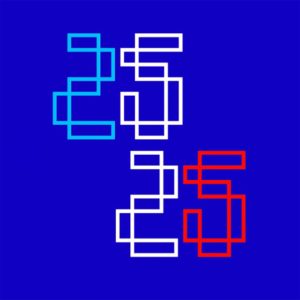 If Factory Floor continue at their current rate the next album will likely be a recording of Nik Colk Void in a room. Clapping. With one hand. A lot has changed since the band’s 2011 self-titled debut. A lot has been lost, at any rate.

Literally 33% of the band, in fact, with the departure of Dom Butler leaving Void and Gabe Gurnsey to carry the can. But they’ve also purged the way they sound. Which, given the last album was hardly an ornate, baroque multi-part symphony with 12 cannons firing, a 10-piece choir singing and a brass quintet parping, is quite some feat.

They’ve minimised their minimalism. They’ve decluttered their bare attic. They’ve stripped back something that was almost butt naked in the first place. And it works. It really works. 25 25 is a case study in how (even) less can totally be more.

Meet Me At The End, builds around a steady synth wave that undulates throughout as drums, handclaps and a disembodied voice chaotically skitter in and out of orbit around that unfaltering pulse.

Relay has a central pattern of descending electronic notes that could well be someone repeatedly falling down the stairs in an ’80s computer game as competing male and female voices exchange pitch shifting “oohs” across the divide, while the title track may be little more than a frenetic, shivering beat that barely alters for five minutes, but it’s still endlessly compelling.

At times listening to 25 25 is like you’ve broken into a hermetically sealed echo chamber in which reverberations from dance floor’s past, present and future now exist, ghostly spectres that have been separated from their original hosts and now trapped in an airless vacuum awaiting a time where they can be heard again. Which is eerie, hugely fun and rarely less than hypnotic.

Wave is the band at their most urgent, wound up mercilessly by the insistent prod of an electronic blip as snippets of voices saying flutter around. Slow Listen throbs like a collapsing star, as again Void’s voice is chopped, warped and then redistributed across the entirety of the running length, while the excellent Dial Me In finds the drums go full-on Blue Monday, the oscillations become more metallic and the groove is jackhammered into your consciousness.

The approach may have been reductive, but the result is not reductionistic. While occasionally you miss the humanising influence of an analogue drum, or Void’s bowed guitar or even a voice which sounds more flesh and blood than silicon, the sheer force of will that drives 25 25 batters you into submission.

At the heart of 25 25 burns a very punk ethos. This is a synth. This is another. This is a drum machine. Now make an album. It may be simple, but it’s definitely not stupid.