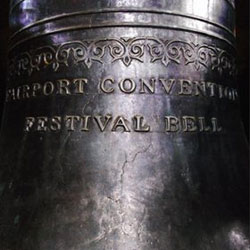 Despite the fact that the quadragenarian Fairport Convention and its assorted progenies are almost solely responsible for the infinitely rewarding electric folk revival of the 1960s and ’70s, it’s still difficult to get too excited about Festival Bell, the veteran folkies’ 26th studio effort. For a start, the group of musicians behind Festival Bell share all of one member with the young band responsible for the prolific, revolutionary run of folk rock LPs of 1968 through ’69 that culminated in magnum opus Liege & Lief, in rhythm guitarist Simon Nicol; the remaining quartet of musicians having joined at various waypoints throughout the terminal commercial decline of both Fairport and old-timey trad-folk rock in general.

Secondly, when a band has a combined age of 298, conventional wisdom (pun thoroughly intended) usually dictates that it’s probably time leave the whole ‘music’ thing to their younger heirs apparent. However, conventional wisdom also once held that the Earth was flat and that you could deduce a man’s personality from the bumpiness of his noggin, so feel free to get excited; because Festival Bell is a very good album indeed.

For the most part, it’s in no way, musically, a huge departure from the traditionally-inclined folk rock first perfected and trademarked by the band some 40 years ago. Mercy Bay, a rambling, acoustic guitar-driven historical narrative about an ill-fated search for the North-West Passage; Reunion Hill, a plaintive, stirring ballad propelled by a military-style drum march and soaring violins courtesy of resident Soft Machine alumnus Ric Sanders; and the shuffling, deliberate Renaissance fayre-isms of London Apprentice / Johnny Ginears, an unashamed glorification of the lost art of Cockneyism, are all prime Fairport – albeit with a spruced-up, distinctively contemporary production.

It’s partly this production, courtesy of engineer John Gale, that stops Festival Bell entering the territory of the hollow pastiche or pointless re-hash. The first thing one notices when putting the record on for the first time is just how darned modern it all sounds (as modern as songs about the Age Of Exploration are ever going to sound, anyway) – it’s clean, clear and obviously brand-spanking-new, with Gale satisfyingly making the most of the technology at his disposal without making the album sound overly bright, clinical or squashed. In that respect, Gale and the Fairports have pulled off something very difficult indeed; that musical El Dorado of sounding concurrently both modern and effortlessly timeless.

It’s also frequently and surprisingly pop-orientated, and always thoroughly accessible. It only takes one or two listens for the majority of songs – most penned by talented mandolin player and multi-instrumentalist Chris Leslie – to begin the oft-drawn-out process of becoming embedded in one’s subconscious, and, in many ways, it’s a sad indictment of the state of the modern music industry that more people won’t get to hear such melodic, carefully-crafted material.

However, as pleasant as these “prime Fairport” numbers are, the real stars of the show come in the album’s odder moments; and there are a few. The two contributions by aforementioned fiddler Sanders, Danny Jack’s Chase and its thematic sequel Danny Jack’s Reward, are masterful, tightly-coiled folk instrumentals that substitute vocals for catchy, bouncing fiddle lines – so far, so normal – but the latter also has a bizarre, Rush-like tempo change around a minute and a half in, with the song first slowing to a cod-reggae skank, complete with bass solo, then building to an intense mandolin and fiddle duel before launching back into the song’s main riff. It might sound ridiculous – and it kind of is – but it works.

Further weirdness comes in the form of Ukulele Central (opens with a four-part barbershop harmony spelling out “U-K-U-L-E-L-E”; morphs into a bouncy, Hawai’ian-themed celebration of the eponymous instrument), Albert & Ted (more proggy time signatures; slap bass solo) and a contemporary re-interpretation of the late Sandy Denny‘s country-tinged Rising For The Moon, which, when sung by a male vocalist, sounds uncannily like a mellow, English version of Cotton Fields.

Festival Bell is by no means perfect. It can, at times, become somewhat samey, and, at just over an hour long, could definitely do with a trim. But none of that’s really important; because the music stored within Festival Bell’s grooves is living proof that the venerable Cult of Fairport – that which transcends mere band members and musical trends – is still very much alive and kicking. And long may it last.