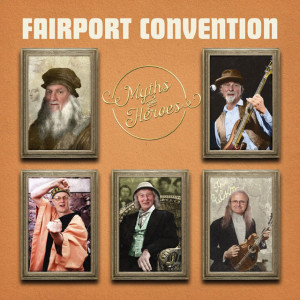 The phrase ‘living legends’ may well be an overused phrase these days, but it’s one undoubtedly one that applies to Fairport Convention. The doyens of the folk-rock movement have been recording and touring, in various incarnations, for an unbelievable 47 years and in that time they’ve counted stellar names such as Richard Thompson, Sandy Denny and Dave Swarbrick in the ranks.

This current incarnation of Fairport Convention – founding member Simon Nicol together with Dave Pegg, Ric Sanders, Chris Leslie and Gerry Conway – has been together for 12 years and is now the longest-serving unchanged line-up. At this stage in their career, they’d be forgiven for simply touring Leige & Lief every year and concentrating on curating their legendary Cropredy Festival. Yet Nicol and company are unwilling to rest on their laurels, and Myths & Heroes is their 27th studio album.

Anyone with preconceived notions about what Fairport Convention are all about may be a bit non-plussed at Myths & Heroes. This certainly isn’t a straightforward folk album – the opening title track is a fairly catchy, simple pop song, which nestles between jaunty instrumentals and wistful ballads about tragic child soldiers.

Although Nicol and Pegg are arguably the most well-known members of the group these days, chief songwriting duties are assumed by Leslie. It’s Leslie who penned the title track, and the equally catchy Love At First Sight. He’s equally adept at the more reflective moments, such as the lovely Theodore’s Song, which has a chorus that’s likely to echo round the head of anyone who hears it for days afterwards.

The more traditional, ‘folky’ side of Fairport is also on display throughout the album – there are a handful of beautifully played instruments, especially the riotous polka of The Gallivant which seems impossible to stay still to, and the intricate mandolin battles featured in The Fylde Mountaintime/Rog. It’s these moments that show Fairport at their very best: a group of old friends in perfect synch with each other, sounding like they’re having an absolute blast in the studio.

Despite this though, perhaps the best moment is one of the album’s more solemn ones: a dignified lament to the youngest solider to die in World War I, John Condon. Nicol tells the tragic tale of the boy soldier who perished in the trenches at Ypres aged just 14, while his band conjure up a stirring Celtic folk ballad. It’s both a fine tribute and a good example of what Fairport Convention do best.

As well as the contributions from the likes of Nicol, Leslie and Pegg, there are also guest spots from the veteran folk singer Ralph McTell, who has written the excellent Clear Water, and PJ Wright, who contributes the reflective Home, a number which celebrates the love of family and old friends. It’s the perfect song for a long-standing collective like Fairport Convention.

Obviously, with the band being at this late stage of their career, there won’t be too many surprises held in Myths & Heroes. Anyone who’s looking for thrills and unexpected moments are best looking elsewhere – this is basically a gang of extremely accomplished musicians in their 60s getting together, who have no need to break any new barriers. As such, it’s another worthy entry in the canon for this particular gang of heroes.