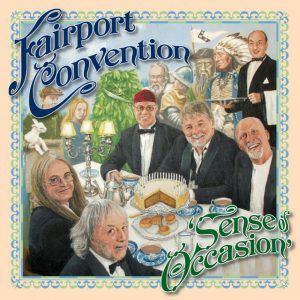 Happy birthday Fairport Convention, 40 years old. Here’s to another 40. It’s been a rocky old road to get to this point but we’ve made it. And they’re making a big deal of it. The title of their latest album is appropriately celebratory, and to mark the milestone, at this year’s Cropredy Festival the band will perform their seminal 1970 masterpiece, Liege and Lief, in its entirety.

You’ll find no one to argue with the fact that Fairport’s most intense and productive years came between 1967 and 1970, the above album being that period’s crowning glory. The following years have been about inconsistency, tragedy and the upkeep of their annual glorious knees-up in the Oxfordshire countryside.

This is not a great album. Folk-rock back in Fairport’s heyday was marked by a loose, unkempt swagger personified by Sandy Denny and John Martyn. But today’s Fairport are just too smooth. I’m not saying they must be dirty old men to be credible, but a little less voice coaching and instrumental virtuosity would be nice. Actually it wouldn’t be nice, and that’s the point.

Simon Nicol’s baritone is too easy on the ear and while fiddler Ric Sanders is technically immaculate and very fast, to the legions of Fairport faithfuls, he surely lacks the soul of Dave Swarbrick. The Bowman’s Returns comes and goes with the listener barely knowing it was there.

Chris Leslie is now the musical heart of the band, and the multi-instrumentalist has, I grant, written a couple of nifty tunes here and there. Keep On Turning The Wheel is a Paul McCartney-esque piece of happy charm, though, as with many Leslie songs, his twee and sentimental lyrics do hurt. The Vision, which has ‘I’m still on a journey/Heading down a road less travelled/I guess we’ve all got to get there/In our own time and way’, veers too close to lighters-swaying-in-the-air territory.

His Edge Of The World is another spineless time-waster that tries to fit square pegs into round holes. The album is a bit too long, and could have done with losing deadwood like this.

The band re-arrange Tam Lin, the signature from Liege and Lief, and it’s ok – though comparison with their original does expose their polish and dapper production, an Achilles’ heel. It was not so evident on their fine 2003 effort, Over The Next Hill.

Fairport are pals with Glenn Tilbrook, whose Untouchable is Sense Of Occasion’s best track. Again, there are hints of McCartney’s 90s output. Whatever folky direction Tilbrook’s career is taking (the Fairport connection, producing Nick Harper), choruses that wouldn’t be out of place on Rubber Soul prove his capacity for writing a pop classic remains. And Sense Of Occasion is all the better for it.

We couldn’t expect them to move the world with this record, and they haven’t. But to be still churning out music, of a generally fine standard, after 40 years is an achievement that each and every person who was ever in the band can rejoice in. Raise a glass and take a bow. And current keepers of the key: try harder next time.