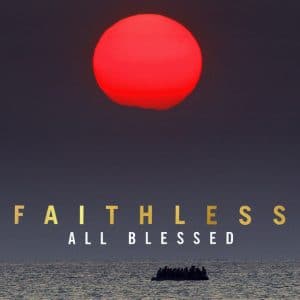 In their first album as Faithless for 10 years, Rollo and Sister Bliss have decided to sit down and take a long, hard look at themselves. That is not being overly dramatic, more a shift of focus from house music monsters to inward looking, conscious material.

The band – with or without Maxi Jazz – has always had the capability to switch between their inward looking side and an extravert, party-loving exterior. Even Insomnia, for all its anthemic qualities, is a darkly-tinged track of anxiety and worry. It just happens to have a seismic riff in the middle.

All Blessed is more like a slower, thoughtful version of Insomnia without the big hooks – and with a new cast of guests. The music is nowhere near as derivative as that might suggest, mind, for the lyrics are carefully considered and the moody textures expertly handled, as you would expect from someone of the production calibre of Rollo.

The guestlist is a blend of youthful promise and experience. It is headed by poet Suli Breaks, whose distinctive tones bookend the album, with cameo appearances from Gaika, Jazzie B and an underused Damien Jurado among others.

All Blessed is ultimately a positive album but spends a long period of time with its head bowed. Moody textures and pensive vocals are an enduring feature of the first 20 minutes, but it is a meaningful start. “Have you looked for the poetry beneath the grind?” asks Suli Breaks on Poetry, then on I Need Someone the standout lyric from Nathan Ball is “I feel like no one can hear me!” In the wrong hands this might be interpreted as self-importance, but the mood is well judged, reacting against a fast-moving world of modern technology with no time for thoughts or emotion. “Sometimes we forget to see what’s right in front of us,” notes Remember with piercing accuracy.

Ironically, when the album starts to lift its head, the lyrics are in praise of technology. “However much I love you baby, I love my synthesizer more,” exults Synthesizer. Its burst of euphoria is all the more notable for what has gone before, but the track stands alone as we segue back into dark textures for the dubby My Town. Here the sonorous voice of Gaika makes a lasting impact.

What Shall I Do? is the album’s beating heart. Two differing voices offer views on immigration, while the listener has the added stimulus of the album’s provocative artwork, a boat crammed with refugees against a blood-red setting sun. The track achieves Rollo and Sister Bliss’s aim with this album; to make you think. It adds some urgency to the tempo, but the darker undertones have been permanently set now and are hard to dislodge. Even the calming Take Your Time, where Jurado’s beautiful tones are briefly but meaningfully cast, does not fully dispel the darker moods of what has gone before.

It is brave of Faithless to return with an album that does not play to their perceived strengths of big-boned club music, but it is no surprise to report that by and large they pull it off. A little more light to go with the shade would not have gone amiss, but that is not the world in which we live. Rollo and Sister Bliss are back down to earth, along with the rest of us.