Faithless – Everything Will Be Alright Tomorrow 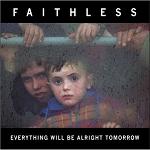 The first question I had to ask about this album was: “Why?” It seems oddto remove such a crucial element of the Faithless set-up for thisrecord – a bit like a sandwich without the filling. Still, here it is -Maxi Jazz is removed for what amounts to an instrumental EP, and theresults are surprising.

The concept is to take tracks from No Roots and present them in theirown right as continuously linked meanderings of a similar nature to mid-’90sambience, i.e. let the background come to the fore. We get versions of NoRoots, Love Lives On My Street, Pastoral and Everything Will Be Alrightamong others. For the purposes of this review I decided to try and assume Ihad never heard the vocals, to see if the music can stand on its own twofeet without them.

Rollo’s assured production hand ensures the textures are constantlychanging, never static, and sound pictures gradually evolve, patternsshifting from light to dark and back again, with snatches of melody drifting inand out of focus. It’s mostly inconsequential but good mood music all thesame.

The main problem here though is that in shadowing No Roots, Faithlesshave had to stick to that record’s “one key” philosophy, meaning thatvirtually every note is in Sister Bliss’ chosen key of C minor. This isall very well, but there’s a limit to how much you can achieve in the samekey for half an hour without any obviously distinctive melody.

Nevertheless, Everything unfolds at an easy walking pace, with piano,string pads, light percussion and various atmospherics. It’s not exactlyFuture Sound Of London, but it’s perfectly pleasant. Maxi actually makesa brief appearance in Track 2 (Swingers on No Roots), but this onlyheightens the frustration of his absence, disappearing as quickly as hearrived.

No matter, the atmospherics continue, through two versions of I WantMore – one up tempo, one slow. The soothing aural texture remains,still in the same key until the final track.

Here the mould changes. Unlike the others, Blissy’s Groove is instrumental in conceptionand has noticeably more musical activity. It is by somedistance the choice track for this chill-out compilation. A distinctivemelodic fragment gnaws its way into your consciousness throughout thenine minutes, and there’s a definite urgency about the beats that’s lackingelsewhere.

After 40 minutes of Bliss-ed out music it can be concluded that theinstrumental idea isn’t as silly as first thought, and the fact that it’s available cut-price is bound to tug at the purse strings of Faithless completists. To behonest, it’s worth having for Blissy’s Groove alone.