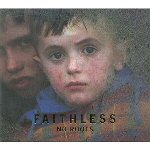 Dance music seems to be in the middle of an identity crisis at the moment as the big names of yesteryear struggle to prove they still have something to offer. Times are tough for Faithless, after becoming the stadium-house music band of choice they took a diversion into more elusive roads with last album Outrospective. They then watched as they were eclipsed by Rollo’s kid sister Dido, and her period paens to cosy middle-class heartbreak. No Roots then adopts a self-consciously conceptual approach to that three-legged mythical beast…the dance concept album – words to chill the very heart.

While not quite Spinal Tap (all the songs are played in the key of C) No Roots is one long dialogue between Maxi Jazz and the album’s guest vocalists (including, of course, the ever-present Dido) spread over two sprawlingly tedious tracks. The album opens with Mass Destruction, (in sanitised form from the single version) a cosy anti-war rap off-set by a laid-back synth beat.

I Want More ups the tempo with a sampled Nina Simone outclassing anything Maxi and co. can offer. It also sounds incredibly dated since the Verve Remixed (jazz label) album from 2002 worked to much greater effect than this lame cred sample. From here, No Roots remains a middle-of-the-road chillout album, with uncomfortable ballads, acoustic guitars, limp dance and portentous vocals.

It’s only briefly on Swingers and on the reworked single version of Mass Destruction (tacked on at the end of the album) does there appear to be any sign of pulse or imagination as ‘live’, coruscating guitars spin tightly around Maxi’s delivery to create something sadly lacking from this album – tension.

Only on the penultimate track, In The End, is there hope for the Faithless devotees as there is a glimpse of their trademark sound, the sweeping synth which filled Insomnia and Salva Mea. But even Sister Bliss’s shrill, semi-hard-house synth stabs are all but gone but what has replaced them still manages to sound dated.

Each successive album, from Reverence onwards, has seen their shine diminished to be replaced with a dull studio sheen and lack of ideas. They seem to have regressed rather than evolve. Tempos are lower and song structure takes priority over getting the point across succinctly, and imaginatively, with each track a progression on the previous one, lumpily segueing into the next. Maxi Jazz can create authority with his vocals, but all too often he takes a back seat allowing fellow wordsmith LSK to vary Maxi ‘s philosophical/ political ramblings with a much sweeter and sleight delivery.

No Roots is no ‘hands-in-the-air’ affair, offering a far more (ahem) grown-up and sombre affair where music seems to take second place to philosophy, which is either just woolly or incredibly naive. It’s just not very listenable and is like being stuck in a bass-bin with a lightweight stoner putting the world to rights (probably some white ‘trustafarian’ called Simon from Brighton).

This is a pedestrian album for half-arsed polticos who think Basement Jaxx are a bit too rowdy. The entire album seems an ill-judged, laborious listen and pretentious project laden with social conscience and dance beats. It’s like expecting a Big Issue seller to start break-dancing – in short, stupid and ordinary. Faithless, pointless.