by Sam Shepherd
published: 28 May 2015 in Album Reviews
Tweet 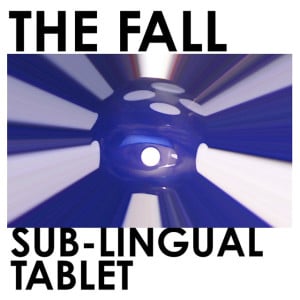 “If it’s me and yer granny on bongos – it’s The Fall”. So goes that Mark E Smith quote, which goes some way to explaining the band’s revolving door policy over the years. There are a great many quotes and ideas that are constantly used about The Fall in order to give their quite phenomenal career and back catalogue some kind of understandable narrative. Some of them are true, some mythical and almost all of them have been mentioned so many times over the years that they’ve almost become a cliché.

Long term aficionados of the band will be pleased to find that their 31st album, Sub-Lingual Tablet, is perhaps their most coherent and complete album for nearly 10 years (2005’s Fall Heads Roll was arguably the last album on which the band was really firing on all cylinders). John Peel once observed that “they are always different, they are always the same” and there is some evidence of this to be found. From the opening spiky pop inflections of Venice With The Girl to the album’s closing moments, it’s an album that fits into the band’s oeuvre with no problem whatsoever.

Yet there is a certain amount of subversion to what some expect from The Fall. For a start, this incarnation of the band has been in existence for eight years now which flies somewhat in the face of the “hire ‘em and fire ‘em” policy of MES. Indeed, rather than strip the core out, he’s augmented it with Daren Garratt who joins the band as a second drummer. Your granny will have to wait in the wings just a bit longer. There’s also very little that stands out as being particularly different, at least In terms of The Fall. So whilst this is a more convincing collection than Ersatz GB (for example) it doesn’t find the band pushing at boundaries or confounding expectations. Hopefully this version of the band can exist for long enough to really begin to push things, but for now, they’re starting to sound settled. Whether that bodes well for the future is anyone’s guess.

As for Mark, well, he’s in fine form despite becoming more indecipherable with every release. Sometimes sounding as if he’s drowning in phlegm, elsewhere he’s still gobbing out his lyrics with assured venom. The understated tribal feel of Junger Cloth might sound as if he’s having an eye test “I can make out…E…a reversed ‘y’…acrylic lower, Urals, question mark…” but there’s drive to his delivery rather than the almost drooled approach of recent years. The insistent thunder of Fibre Book Troll (or Facebook Troll, should you be getting this from iTunes) finds him in particularly aggressive mood as the band lay down a hypnotic groove. The barked common sense of Quit iPhone questions people’s attachment to their technology in typically sharp fashion although the closing slurred five or six seconds does raise the question of whether you’re listening to a genius or a tramp who happens to come up with a few killer lines.

The Krautrock inspired Auto Chip 2014-2016 is the album’s highlight. A taut 10-minute epic sees the band in full flight, with MES’ question of “how bad are English musicians” being answered with considerable aplomb. It’s been a while since The Fall could be considered a fully functioning band rather than a collection of musicians with MES as an all controlling figurehead, but Auto seems to be the sound of The Fall as a fully cohesive unit, and it is massively impressive. Dedication Not Medication is shot through with a chilled sense of menace. Driven by David Spurrs’ bass and interjections from Elena Poulou’s synths, Smith calls into question Pierce Brosnan’s credentials as a (Mr) pharmacist.

Snazzy’s short but effective swagger could probably have been allowed to continue longer than the 2 and a half minutes it is granted before the fade out as the band and Smith just seem to have hit their stride. On another day, it could have been drawn out into something as impressive as the hypnotic Auto Chip.

There is of course the odd misfire here and there, most notably Stout Man, a reworking of a Stooges track which is entirely unremarkable other than for the line “big fat man, pushing a tiny pram”. Pledge is also somewhat uninspired, as MES sets his sights on crowdsourcing and the band scampers around aimlessly. These moments aside, Sub-Lingual Tablet is this incarnation of The Fall’s most impressive addition to the band’s canon.