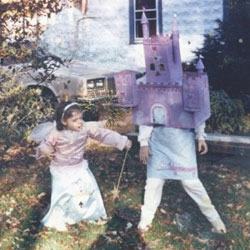 Looking at the album cover for Brooklyn-based five piece Fang Island’s eponymous debut, it would be easy to jump to conclusions. It features what looks like a found photo of two kids in the front yard, one dressed up like a princess, the other with a giant castle suit on. It’s the kind of random, artfully ironic and seemingly meaningless photo that pretty earnest blog bands use to remain faceless and be knowingly detached from, like, the real world. Using an iPhone app. Yet, the music these guys make is fun with a capital ‘F’.

In fact, much of their debut album comes across like a more experimental Weezer, all chugging rock guitar riffs and pummelling drums. They’re friends with Andrew WK, which probably tells you all you need to know. But where his schtick is to bolt on huge, dumb choruses to the rock cliches, Fang Island break most of the rock rules. Songs drift by without so much as a verse or a chorus, whilst a number of tracks are practically instrumentals. Careful Crossers, for example, features a typically histrionic guitar solo over a time signature not often used in mainstream rock.

When they do decide to dip their toe in to the sea of straight-up pop they produce the brilliantly dumb Daisy. It’s a song that will burrow deep into your conscious on first listen, and whether that thought fills you with excitement or dread will pretty much define your response to the rest. The chorus is a jumbled mixture of non-sequiturs and the stop-start melody that shouldn’t work, yet somehow they pull it off.

Elsewhere they’re not so lucky when it comes to striking a balance. Tracks like Welcome Wagon and Sideswiper rely too heavily on fairly similar sounding guitar parts that have a tendency to pummel any semblance of a tune into submission. Occasionally – as on the closing Dorian and the beginning of Davey Crockett – they calm things down and take a breather, but it’s not long before another Meatloaf-style guitar part rears its mulletted head.

Fang Island won’t be to everyone’s taste. They’re a strange combination of dumb and intellectual, as if they’ve studied how to make fun sounding music and slightly over thought it. But there’s much to enjoy on a debut that’s never boring.