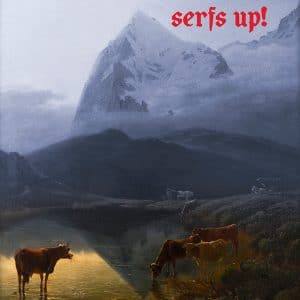 Fat White Family appear like some musical hydra; where you chop off one head, three more spring up. If they’re not releasing increasingly focused sleaze-pop as their main moniker, they’re winging off into: Moonlandingz, The Insecure Men, Eccentronic Research Council or Warmduscher to burn off some of their excess creativity.

The brothers Saoudi (Lias and Nathan) and wonky-toothed Saul Adamczewski continue their trajectory from documenting the pound-shop sleaze of the gutter by climbing up onto the pavement, where the dirt is more sophisticated at belying its origins. Rough edges have become smoothed, subject matters changed, but there’s still an underlying disgust at humanity and the trappings of success.

With a wry nod to The Beach Boys in album titling, Serfs Up is the Fat Whites’ third album and first for major label Domino. So have they gone for the mainstream with a Pet Sounds opus or are they still poking around murky backwaters with a big stick looking for new kicks? The answer is a schizophrenic yes, no and maybe.

The pervading fog of the band’s chemical intake that hovered over their previous albums has cleared to reveal an atmosphere of cohesion rather than disparity, sophistication over maelstrom and tunes over musical malevolence, but at what cost?

Feet stomps its authority with a whiff of a netherworld Leonard Cohen intoning his gloom over an eastern-bloc disco beat. Strings stab and swoosh like an assassin proud of their work; the mirrorball is cracked from side to side; the sequins are hanging in tatters, grubby and sticky from an unidentified fluid, and there’s a muffled beat rising up from a distant room.

Next up on stage, and flipping the script like a vinyl pancake is I Believe In Something Better, which sounds like Throbbing Gristle doing industrial exotica (a good thing). Meanwhile in the chill-out rooms, the duo of Vagina Dentata as a low-slung lounge lullaby, and Kim’s Sunsets graced with blissed-out Tropicalia (possibly about the North Korean leader) soothe your troubled brow by insinuating sinister intent while sweetly cooing in your ear.

Before things become too horizontal, Fringe Runner bursts in like some mad dash around an excitable kid’s game show with synth stabs and rave-era percussion. Tastes Good With The Money is a mini-opera beginning with Gregorian chanting before lurching into a sludgy glam-rock stomp featuring Baxter Dury muttering a ‘mockney’ gangster monologue. Rock Fishes lurches backwards into Serge Gainsbourg cocktail-reggae territory, with wry lyrics about Lias “beating myself to death with a bottle of orange Lucozade”. Sounding more like the disgruntled musings of Luke Haines, it sounds more forced than farce.

Oh Sebastian conjurs genteel Brideshead Revisited aristocracy under threat via a chamber pop revolution. When I Leave lassoes a spaghetti-western mood but overstays its welcome before the welcome nonsense ending of a chanted “slubadubdub” brings things to a close. Bobby’s Boyfriend tries to find a nocturnal voodoo vibe but the repeated line that “Bobby’s boyfriend is a prostitute… and so is mine” grates quickly.

Serfs Up! is, then, an oddly neutered beast, lacking passion while veering towards the cliff-edge of credibility and acceptance. There are moments of brilliance and experimentation, but these are too often outweighed by pedestrian tunes and indistinct vocals. The palette of genres being explored is worthy, but it validates the old maxim that “just because you can doesn’t mean you should”. By this evidence the serf rebellion isn’t happening just yet.